Coming to the defence of FLEGT

Recent comments from the EC arising from the ‘Fitness check’ on the EUTR and FLEGT have cast doubts on the latter’s future, but Republic of Congo minister of forest economy Rosalie Matondo says we must build on this ground-breaking timber trade initiative, not undermine it

Tropical forests covering 65% of the Republic of Congo are a social, economic and environmental blessing.

They provide food, medicine and incomes. They contribute around 6% to our GDP and forest industries employ more people than any other sector in the Congo, after oil and gas. They are also vast repositories of CO2 and biodiversity – a critical instrument in the fight against the climate crisis. Their health and the wellbeing of our nation are inextricably entwined and their destruction, from illegal logging, bush fi res linked to climate change, or other causes, would reverberate far beyond our borders.

In 2008 we started negotiating a FLEGT Voluntary Partnership Agreement (VPA) timber trade deal with the EU. VPAs encourage timber-producing countries to improve forest governance and strengthen their laws against illegal logging, with the prospect of favoured timber export access to EU markets.

The VPA has helped our government translate our will to fight the illegal timber trade into concrete action. This includes introducing a timber traceability system to track and uncover illegal timber; installing a database system which documents legality and transparency across timber supply chains; social obligations requiring timber concessions to contribute funds to communities; and giving civil society a role in forest management decisions.

In parallel, our government has introduced a new forest code, which is underpinned by the VPA’s principles.

Yet the momentum we’ve worked hard to build could be in jeopardy.

Earlier this year, the European Commission carried out a so-called FLEGT Fitness Check.

Though few responded to it, the outcome was that the Commission is now considering dispensing with FLEGT licences. These licences guarantee timber has been harvested, processed and exported legally. Once a country is authorised to issue them, their timber exports to the EU no longer have to undergo further due diligence under the EU Timber Regulation.

Our FLEGT-VPA was an agreement based on equal consultations between two parties. Both should have a say in decisions which alter its basis.

If European markets are not open to Congolese and African wood, our VPA becomes all but useless and if the EU decides to ends FLEGT licensing everyone loses.

In the Congo it could slow the momentum we have built in protecting our forests and it would diminish the EU’s role in fi ghting the illegal timber trade.

Both the EU and the Congo have invested immense time and money in the FLEGT-VPA, and our collaboration has produced tangible results, inspiring reforms beyond the forest sector.

It is a partnership that we value and need to build on to protect the Congo Basin rainforest, which is so important for the environmental health of our planet.

Closing down FLEGT licences and negating our commitments will not help us in this shared aim. 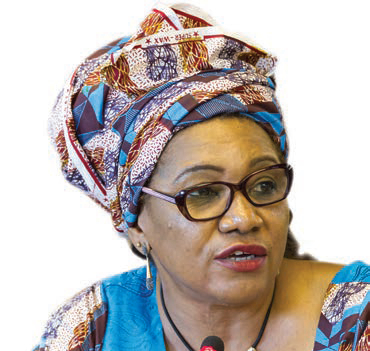