Healthy growth in the UK housebuilding industry, and timber frame in particular, is boosting demand for Hundegger machines.

The German manufacturer's UK representative, Chris Osborne, said nine machines had been sold in the past year and he forecast continuing year-on-year growth.

"We've had some good enquiries for next year and are targeting 10-12 machines."

Truss and timber frame manufacturers, and green oak post and beam companies were all busy and the trend was expected to continue over the traditionally quieter winter months.

"We know of one oak frame company whose order intake in September was two-and- a-half times above their budget, and another major player has never been busier," said Mr Osborne. "We noticed the pick-up through the year and now most companies can see their way through to spring, which is unprecedented in the UK building industry."

This has resulted in lead times for Hundegger machines extending to around April next year, despite adding more production capacity in Germany

Part of the demand, said Mr Osborne, was from companies being "a bit more adventurous with designs" in building timber frame houses and looking to introduce greater prefabrication here in the UK. There was also interest in processing glulam and more UK companies following European processing methods, with the goal to spend less time on site assembly.

Also, many of the traditional truss and frame manufacturers wanted to expand, or improve processes and efficiency.

"They're looking at being faster and more seamless in their production, and probably consolidating a lot of old processes. There are some cases where a Hundegger can replace two or three manual machines," said Mr Osborne.

The most popular machine in the UK is the five-axis, optimising SC3 Speed-Cut which can cut angles and compound angles, averaging 2,000 pieces per shift. The K2 CNC machining centre is more suited to green oak and glulam processing. The machines also accommodate truss and timber frame manufacturing software, creating a paperless process and less room for errors.

"Companies are looking for a more continuous link from the office to processing, to do things better and in a more organised way," said Mr Osborne.

"The truss market in particular is brutally competitive and if anybody is not operating to the best efficiencies they will lose money.

"We now have some excellent references here and it is usually possible to arrange a local demonstrations," he said. 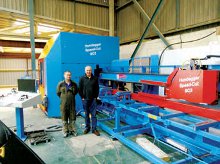 UK engineer Neil Griffiths and Chris Osborne, midway through and installation of an SC3 machine at Tailormade Frames in Hereford