Delegates at last month’s Trussed Rafter Association annual general meeting were in a positive mood, thanks to the upturn in construction activity. Sally Spencer reports

Around 70 members of the Trussed Rafter Association (TRA) attended the organisation's annual general meeting at the end of last month and it's fair to say that the news they shared was considerably more upbeat than in the last handful of years.

Summing up business in 2013, outgoing TRA chairman Paul Baron (commercial manager for Alpine and Gang-Nail) said it had been a game of two halves. The chilly climate in the first five months - both meteorologically and economically speaking - put a halt on any construction, but in May it all changed. The various government initiatives, such as Help to Buy, kicked in and the building industry started to reap the benefits.

First-time buyers came back to the market and in October 2013 no fewer than 26,800 mortgages were approved - the highest monthly total since November 2007.

However, the sudden upsurge in business meant that the road to recovery had been pretty congested and the supply chain had been left "creaking under the strain".

"There have been brick, block, scaffolding and even kitchen unit shortages," said Mr Baron, adding that second hand equipment had become very scarce.

"Instead of looking for work we're now worrying more about getting it priced and manufactured," he said, before adding that these new challenges were preferable to the problems faced this time last year.

While the recovery in housebuilding - and by extension, trussed rafter sector business - seemed to be under way, Mr Baron said there was still a long way to go before the construction sector was back to normal. "The number of mortgages sold in 2013 reached one million for the first time in five years, but the average for the last three decades has been around 1.35 million," he said.

In comparison with other periods of recession over the last four decades (1973, 1979, 1990), this one had been the deepest and longest and the recovery thus far was "narrow" and led by consumer spending and housebuilding.

"We need to see a recovery in net exports and an increase in business investment."

And, he added, with a general election in 2015, there was increasing uncertainty over the political and fiscal landscape over the next 15 months or so. "Will there be an interest rate rise, for example?" he said.

In his parting shot as TRA chairman Mr Baron advised delegates to "remember the lessons we've learned over the last five or six years".

New building companies
Richard Evans, managing director of Scotts Timber Engineering Ltd, picked up the chairmanship baton at the AGM and reiterated Mr Baron's message that the construction sector had high hopes. Between July and December last year 50 new building companies per month were founded, he said, and almost a million independent businesses were now involved in construction, accounting for 20% of all SMEs.

And more specifically, he said, trussed rafters were still the most effective way to build modern roofscapes. "We need to be alive to the marketing of panellised roof systems but I doubt they would take 5% of the market," he said.

However, he tempered this by reminding delegates that the building sector was still playing catch-up and that the housing market still faces major challenges. "We're not in the boom times. We're 30% down on where we were and 50% down on where we should be.

"In 2012/2013 there were 108,190 completions - the lowest since 1923," he said. "The average house is seven times the average salary, a ratio that has doubled in the last 40 years. Eight out of 10 first-time buyers need assistance from family and friends and the social housing waiting list has doubled in the last 10 years, with five million people currently waiting. It's all quite sobering."

He added that the national planning policy framework had helped deliver planning approvals but delays and conditions meant there was an ongoing shortfall.

"Eighty per cent of housing is on brownfield and land banks have fallen by 20% and even at current building rates will only last another five years," he added.

Other notes of caution Mr Evans sounded included the need for constant vigilance where health and safety is concerned. "We produce products which are inherently difficult to deliver and handle," he said, adding that the TRA Health & Safety Committee's output was "worth the membership alone".

He also warned against being "fooled by the next generation of software". "Let's not get too excited about it. It hasn't dramatically improved our manufacturing capability but in some cases has made it easier for a poorly trained designer to produce designs that some poor soul on the factory floor has to put together. Don't just rely on software, focus instead on the greater number of skilled designers that are required and train them."

And, also on the subject of software, Mr Evans raised some questions over Building Information Modelling (BIM). "Will BIM weaken our design responsibility?" he asked. "We need to stay proactive with our design capability - we need to value it."

Mr Evans also reminded delegates of the value of TRA membership and encouraged them to become more involved.

"The TRA is in good shape," he said. "Being part of the Timber Trade Federation and with Nick Boulton's input has made us more professional and bodes well for us in our relationships with other associations. We need to see the TRA as a safety net - a strong association to represent the majority of the industry in case of problems ahead.

"My message to members is, 'don't complain, get involved'. Join a committee and I guarantee you will learn something because committee members have a great deal of expertise in their field. Attend regional meetings - they are a great barometer of local trade."

TRA training schemes
In other AGM business, delegates heard that work was continuing on "revamping" the TRA's training schemes, with a view to their being available later this year.

TRA's "Trussed rafters for technicians" online course was previously one course of nine units. This original content is being retained but reformatted into two courses which, it is hoped, will encourage greater participation.

"The first three units plus some tasters from later units will form an introductory course which we believe will give new employees or those just starting their careers a wider view of the trussed rafter business," said Nick Boulton, TRA director, speaking after the AGM.

"This unit will also form the first step for potential trussed rafter designers. The technically more challenging content (units four to nine) will be formatted into a second course specifically aimed at these potential trussed rafter designers and intended as an intermediate step preparing them for the specialist software training coming from the system providers (Gang-Nail, ITW, MiTek and Wolf). Prices are yet to be confirmed but the intention is around £150 for each course."

Delegates also heard from Ed Kirk, chairman of the TRA's Health & Safety Committee, who said the group was working to highlight the risk caused by complacency within the industry and was providing guidance on health and safety training, particularly for smaller truss companies.

"We're also updating our method statements on the website and gathering information on how fabricators and site workers should handle spandrel panels."

Mr Kirk also asked members to suggest areas they would like the committee to cover. "Make us aware of issues so we can help to create a collaborative solution," he said.

The Publicity Committee also updated the membership on the success of the redesigned TRA website and its elevation up the search engine optimisation ranks (currently the top item in Google under the search "trussed rafters").

Google Analytics showed that the number of unique visitors had almost doubled to 1,282 per month since last summer, said Cate Gregory, marketing manager of committee member Pasquill. And, she pointed out, members could make the site work for them by keeping it populated with information on their latest projects.

The presentation also included a look at an animation of a metal-web roof structure. The animation, which is available on the TRA website, is a result of the committee's decision last year to concentrate on metal webs and to create some generic marketing tools for the sector.

Trussed rafter manufacturers are now managing demand rather than wondering where the next order is coming fromPHOTO: DONALDSON TIMBER ENGINEERING 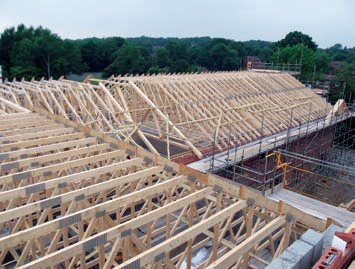 The recovery in housebuilding has been good news for the trussed rafter sector PHOTO: SCOTTS TIMBER ENGINEERING