Built and Grown in Britain

There is major potential for increasing the use of home-grown timber in UK construction, but it needs work and commitment, says Simon Smith of structural engineers Smith+Wallwork

When the government announced plans to auction state forests in 2010 half a million people signed a petition to force a dramatic policy U-turn. That led to the creation of the Independent Forestry Panel to look at future development and use of our woodlands. Its conclusion was that, far from hiving off state forest holdings, the government should enact policies to increase UK tree cover by 50% by 2060 and bring far more derelict woodland back into management.

In addition, concluded the panel, woodland should be developed and managed to meet three key criteria: to maximise its carbon and wider environmental benefits; to enhance its capacity as a social and leisure resource; and, critically, become a bigger and more commercially sound supplier of raw material for the whole spectrum of UK timber processors and users.

Not only is the UK currently one of Europe's least wooded nations (with 13% of land area covered in forests, compared to a European average of 34%), many woodlands receive little active management, resulting in low overall timber yield. In fact only 32% of our forests are managed to produce wood, compared to the 56% average elsewhere in Europe.

The first outcome of this realisation of the need to reinvigorate UK forests as a timber resource was the launch of the Grown in Britain campaign, chaired by Dr Peter Bonfield of the BRE; its aim, to encourage use of British timber across the board and help explore its wider potential. A brand was developed, big name businesses, from merchants to furniture makers and retailers bought into the initiative and Grown in Britain subsequently put down roots as an ongoing marketing effort.

Among the campaign's best known and influential supporters are a significant number of the UK Contractors Group. In fact, at the last report, 18 of its members, with combined turnover of £22bn, had signed up. This underlines that a central goal of the Grown in Britain action plan is to see more British timber being used in construction.

There are two key factors at play here. One is growing interest in life cycle assessment and carbon in construction generally. This is leading to greater interest in using timber in building overall, and the feeling that perhaps now is the time to look more closely at what resources we have in Britain, and whether we can do more with them. And there is considerable scope for increasing the amount we use. Per capita timber consumption for building in the UK is just 0.14m³ a year, compared to 0.2m³ in Germany and 0.8m³ in Finland.

Secondly, using more British wood in British building could benefit the construction industry and the UK's balance of payments. Over recent years UK builders have become increasingly reliant on imports to deliver the new and refurbished buildings required for our increasing population and ageing infrastructure. In 2012 around £12bn or 25% of all construction products and materials were imported, compared to just £6bn in 2000. Adding urgency to this issue is our need to build even more in the future, with our population set to rise to 73 million by 2050.

Our forests will never produce enough to make us self-sufficient (we remain one of the world's largest timber and wood products importers, buying in a total of £2bn worth annually, including about 80% of the sawn softwood used in construction). However, we are still a productive timber force, with an output of 11 million tonnes a year, compared to UK steel and cement production of 10 and 9 million tonnes respectively. And, it is predicted that UK softwood supply is set to grow by 30% to 18.4 million m³ a year from 2027-31, so we should prepare now to use this resource effectively.

What this throws up, however, are the entrenched question marks over the suitability of UK solid timber for building. Hence the fact that, while we are nearly self-sufficient in 'low-grade' products, such as fencing, and we produce significant volumes of panel products from UK-sourced raw material, we not only import the bulk of our construction sawn wood, we also buy most of our engineered wood products (including all our cross-laminated timber) from abroad. Currently only about 1 million m³ of UK-grown sawn softwood makes it into building.

Ultimately, faster-grown UK sawn softwood in un-engineered form may not be able to take on denser, slower-grown competition from colder climates for highest specification applications. But one route for increasing its use is to demonstrate that in many instances, UK construction is currently over-specifying timber in design.

The default for many engineers and architects is to specify C24, and nearly all UK timber is C16. But a simple calculation for a 4m-span floor joist shows a 13% increase in depth enables substitution of C16 for the higher grade. Further work would be required on cost-effectiveness of despecification, but the structural calculation stands. And the performance gap between C16 and C24 can be further narrowed through lamination.

Figures on the use of UK hardwood in construction are hard to come by, but it appears to be limited. What we do know is that 75% of the 500,000 tonnes harvested annually goes for fuel, while sawmillers only process around 75,000 tonnes.

But for those wanting to support the use of UK-grown timber in construction there are already numerous options and products available. These include, of course, C16 sawn softwood and the range of panel products, but also bespoke hardwood frames and some glulam. It is also possible to specify UK made I-joists, albeit hybrids of UK-grown web and imported softwood flanges.

The Coed y Brenin Visitor Centre Extension in Wales uses locally sourced Sitka spruce and Douglas fir in the form of dowelled Brettstapel panels, one of the first examples of this type of construction in the UK

. And the UEA Enterprise Centre in Norwich was developed to employ as much local material as possible, leading to structural use of grand fir, Douglas fir and Corsican pine from nearby Thetford Forest for Brettstapel panels, Larsen trusses and glulam elements. The Wood Award-winning Stowe Visitor Centre uses larch elements from Ashridge Forest for its barn-like structure, involving a contemporary take on traditional carpentry techniques. And the experimental Living Willow Bridge at the Woodland Trust's Cow Hollow Wood, meanwhile, shows what can be done with plantation timber that is only 12 years old, and still growing!

Further research into the use of UK hardwood could also pay dividends. As the figures above show, this is a relatively untapped resource and we need to understand better where native species such as oak, ash, beech and sweet chestnut could be put to highest value use in building.

Looking ahead, it is hoped that Grown in Britain will continue to act as catalyst and point of focus to realise the potential wider societal and economic values that a country gains by using more of its own resources. But with the increase in UK timber harvest already set to come on stream, and longer-term plans to increase our overall woodland cover, even more planning, research effort and marketing focus is needed to reap what could be huge benefits from constructing more British buildings using more British wood. 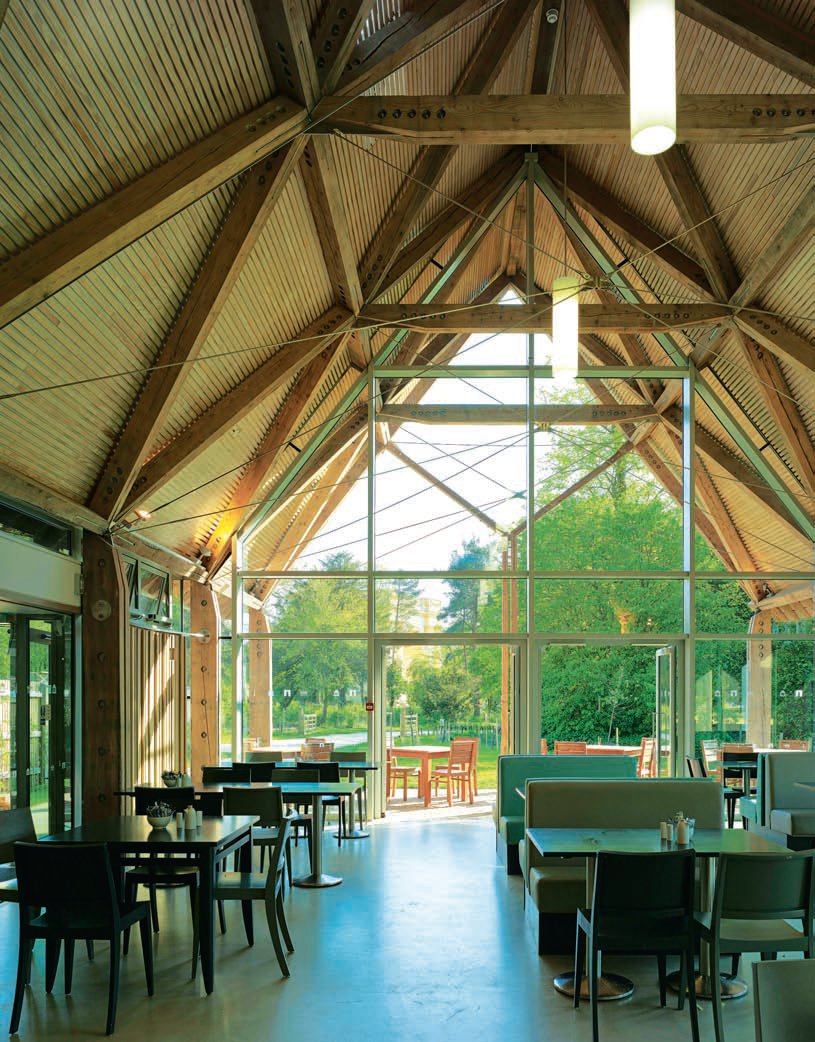 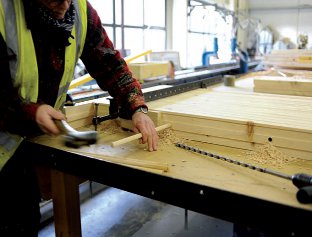 The Coed y Brenin building is constructed with Brettstapel panels made from British-grown Sitka spruce and Douglas fir PHOTO: ARCHITYPE 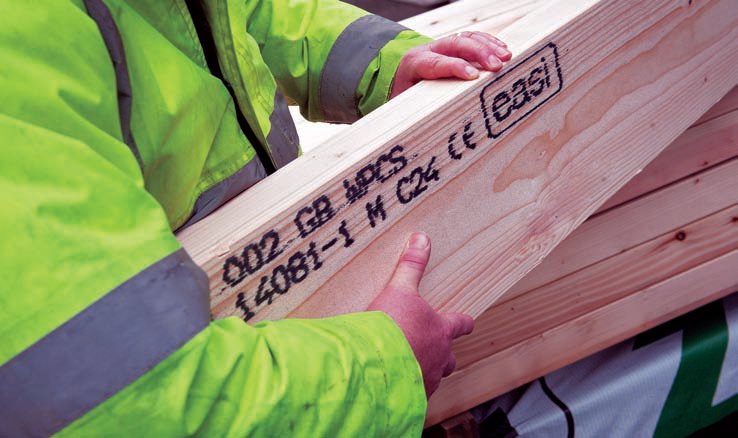