Sideloader manufacturer Bulmor’s roots are in the timber industry and it remains its most important market. Keren Fallwell reports.

There was a time when 90% of all Gouda cheese in Europe was carried on a Bulmor fork lift but it is the timber industry that has always been the largest market for the Austrian manufacturer.

In fact, the company's origins lie in the timber industry.

The original company, Schöberl & Sons, was founded in 1879 to repair tractors and agricultural machinery. It also served sawmills, which were generally situated on long, narrow sites in valleys where they could access water for power. Timber was stacked to air dry on the edge of walkways and so to service these confined areas the company developed what was effectively the first sideloader - a trailer pulled by a tractor.

It continued to service agricultural machinery until 1968, when it produced its first Jumbo rough terrain truck - again with the timber industry in mind - and since then it has continued to develop and expand.

Under the current owner, Terra, it bought Lancer Boss in 2001 and, in 2007, Baumann's four-way truck business, which included Irion. Now all four brands - Jumbo, Lancer, Irion and Baumann - have been incorporated into the Bulmor range, which includes multi-directional trucks.

Today Bulmor manufactures its sideloaders - more than 40 types and much more sophisticated than the original tractor and trailer - from its base in Perg, in Upper Austria. It has about 10% of the global market and what differentiates it from its competitors, said sales and marketing director Alexander Baumann, is that Bulmor "starts where others stop".

Each of the 300 machines manufactured every year is made to order, developed in close co-operation with the customer, and the bespoke nature means a skilled workforce and no automation. The steel is delivered pre-cut, then Bulmor uses its own press to bend the material, and the manufacturing process begins.

"It's like Lego; we have components but we don't stock any finished product," said Mr Baumann, adding that the welders, who build the sideloaders, are like "artists".

"We have highly qualified staff. They need to be motivated, educated and intelligent," he said.

Bulmor operates a three-year apprenticeship and most people remain with the company once they've qualified.

A sideloader chassis is tough to build because the moving mast shifts the forces from one side to the other, but every Bulmor chassis is made to a 2-3mm tolerance.

The mast also has to withstand the constant movement and twisting as the sideloader picks up and deposits a load. A mast for an 18-tonne sideloader takes one person five days to weld.

While other manufacturers have incorporated technology into their trucks, Bulmor has chosen to keep it simple.

"We use hydraulics rather than electronic components so the sideloaders are easier to fix - you don't need a laptop," said Mr Baumann. "Customers want machines that are easy to work and easy to fix, with little downtime."

Hydraulic cylinders front and back provide balance and keep the machine stable if a front wheel goes into a pothole. Although all these features obviously require hydraulic oil, which rises in temperature during use, little cooling equipment is required as the chassis absorbs the heat.

Each sideloader can be customised, from the number of joysticks to finishing in the client's livery.

"For one customer we put a sensor on the brake pedal so the drivers had to keep their foot on the pedal, rather than drive with their foot out the door, which was a health and safety issue," said Mr Baumann.

Bulmor's main markets are in the EU - Austria, Germany, France and the UK, the Middle East and the US. The industries it supplies include concrete, steel (it just completed an 18-tonne sideloader for Tata Steel) and plastics - and even piano maker Steinway has a Bulmor sideloader - but timber remains its main market, and the timber industry in the UK, in particular.

"We're taking market share in the UK and we have a range of customers, from sawmills to distributors," said Mr Baumann. "In January we sold 30 trucks and we plan to sell 85 this year."

UK Representation
In the UK Bulmor is represented by managing director Russell George and UK sales manager Glen Middleham. It counts among its customers Brooks Bros, which bought 14 trucks, some of them shortened slightly to operate in tight spaces; Carvers, which was worried about punctures, so Bulmor supplied puncture-resistant tyres; and Adam Wilson, which has bought four machines over the past few years.

Unlike other countries, the UK's preference is for diesel rather than electric sideloaders, although Mr Baumann believes this will gradually change.

"Electric trucks are more expensive to purchase but over time they're cheaper than diesel. On a diesel truck the oil filter needs to be changed every 500 hours. On an electric truck you need to change the hydraulic oil every 2,000 hours, so the future has to be electric," he said.

Also, he added, electric trucks are quieter and vibrate less, making them more comfortable for the operator.

Bulmor's multidirectional sideloaders are becoming increasingly popular and Mr Baumann said there is also a trend among timber companies to go higher and bigger.

"Timber companies are taking storage higher so they are asking for higher masts with cameras," he said, adding that the sideloader's forks can be operated independently to counteract the natural bend in a load of timber.

They are also specifying larger vehicles as they now complete whole lorry loads. Bulmor has supplied a timber construction company that was using three vehicles to load one truck. It now uses one large sideloader, which loads from one side, then the other, carrying timber up to 15m in length.

It has also supplied a sideloader to a timber window component manufacturer which operates a pick and pack system.

The operator picks the order in sequence and when a lorry load is collected the components are lifted on to the lorry.

"Our strategic goals are the gradual development and expansion of our multi-directional range and to differentiate ourselves as a bespoke producer offering quality, technical competence and aftersales service," said Mr Baumann. 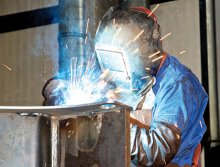 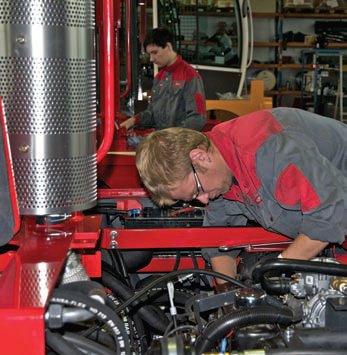 Bulmor’s machines rely on hydraulics, which are easier to fix than electronics. This sideloader was being built for Adam Wilson 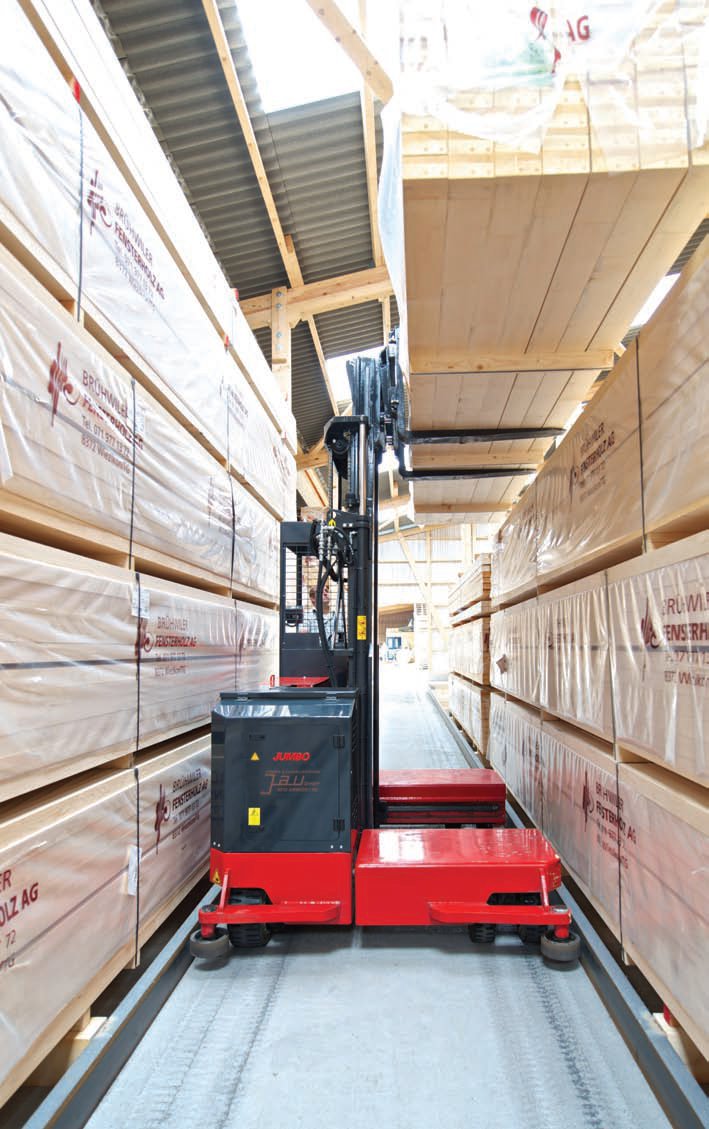 The sideloaders are designed to work in confined spaces