The Japanese glulam and steel hybrid building supplier has recently established a sales base in Belgium and a factory in Austria, having previously shipped its buildings to Europe from Japan. And it sees the UK as a target for its new operation.

"It is a unique market, with a growing interest in timber building, but less saturated than other EU countries," said Europe executive agent Eric van de Heyning.

Illustrating the significance of the show to the company, he added, director Shintaro Nishimura had travelled over from Japan.

Suteki (which means 'nice' in Japanese, the brand it trades under in its home market) uses what it claims is a unique combination of glue-laminated elements and steel connectors to deliver a "limitless" range of house designs.

"We offer our own designs, which can be up to five storeys, or we can work with designers and architects on their projects," said Mr van de Heyning. "The structure is very resilient, designed to be earthquake resistant, and we're offering 10-15 year warranties on the frame. We are also building to Passivhaus standard."

It's a simple system, he added. "After brief initial training by our engineers, just five workers can complete the shell in two days."

In both its Austrian and Japanese plants the company uses softwood glulam from Stora Enso. The former is still building up production, but has initial capacity for up to 1,000 houses a year. 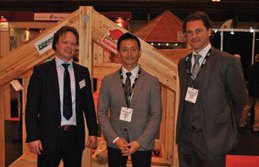