The biennial W Exhibition is the biggest UK showcase for woodworking technology and the message after this latest event is it continues to punch its weight.

Despite some uncertainty in the economic/ political climate, many exhibitiors at the 11,000m2 event at the NEC in Birmingham in October reported good levels of machine enquiries. Some 9,237 attendees – a 4% increase since W16 – were recorded.

Daltons Wadkin has backed every major UK woodworking show since 1971 and had one large stand this year.

Christian Salvador, who has been the face of Salvador at shows for many years, announced that he was now heading up the Salvamac semi-automatic cross-cut business based in Poland, while his brother will now lead the Salvador business.

The Salvamac technology, distributed through Daltons Wadkin is being promoted under the “Simple, Solid and Safe” slogan, with the technology able to operate as either a stop or a pusher. Pallet and window producers are target markets. The UK is Salvamac’s biggest market, with more than 20 machines in this market already.

Daltons Wadkin director Alex Dalton praised the W Show, quoting a 35% increase on enquiry levels at the end of the exhibition’s second day.

The company also made regular presentations on operator training in an Education Zone.

Tooling manufacturer Leitz’s sales manager Brian Maddox summed up the trend in customer enquiries when he said people were focused on improving performance, citing the case of DM Design, which he said was now saving £7,000-8,000 annually after converting to Leitz technology.

“You see people in the workplace using the wrong tools or cutting at the wrong speeds,” he said.

Leitz helped reduce cutting noise on machines at a factory near a residential area simply by adjusting tooling to the correct settings.

Hundegger, CNC sawing specialist in the wood construction sector, announced a new UK team at the show, with Daniel Blades and Rob Bourke coming on board.

Mr Blades said Hundegger’s new emphasis in the UK was to bolster its technical application guidance and engineering support, helping to tailor the Hundegger products – such as the Robot Drive and K2 – for UK customers’ operations.

“We want to make sure the machine is ready to work for the customer on day one,” added Mr Blades.

As ever, Liverpool-based JJ Smith displayed an array of niche machines for specific applications, including the new MZ Project CNC band saw aimed at furniture companies, while the Essepigi throughfeed door finishing machine was also run through its paces.

Cross-cutting is always a strength for JJ Smith and technology on show included a high volume Stromab CT600 and a Cursal cross-cut.

JJ Smith used the show to effectively launch its own Profistop technology – a rival to the established Tigerstop product.

Martin Smith, JJ Smith director, said the company’s range of timber frame machinery was being exhibited at the Offsite Construction Show on November 20-21.

One of the biggest endorsements for the W Show came from Advanced Machinery Services (AMS), which booked its spot for the 2020 show during this year’s event. Director Steve McGloin will double stand space to 320m2, making AMS the sixth largest exhibitor.

“Service is our prime business and selling machines is just a bonus,” said Mr McGloin.

But its machinery supply business is still significant, as shown by a rolling video on its stand of its £2m installation of two high speed 120m/min Wadkin Bursgreen moulding lines at Murdock Builders Merchants’ timber mill in Newry, Northern Ireland.

“The mood is positive despite the uncertainties out there,” said SCM UK managing director Gabriele de Col.

He reported a lot of investment and interest in edgebanders and was optimistic that the interest SCM had seen in Maestro Connect in the US would be repeated in the UK.

Weinig had a strong representation in solid wood machining. Its ever-popular Cube planer/moulder had a new look for the show – painted as a word search challenge, with visitors encouraged to see how many words they could make out of the letters in livery.

The Pro-Master regularly made impressive wood sinks during the show, while Weinig managing director Malcolm Cutherbertson highlighted the Holz-Her Nextec CNC as also creating interest. The machine was set up to make bookcases, an ideal solution for small to medium-sized furniture makers in metropolitan areas. Its memory storage capacity for bookcase designs means it can produce a bookcase in five minutes.

The Powermat 700 series moulder was also shown, as well as measuring tool OptiControl Digital, which complements a CNC grinder which was launched at the beginning of 2018.

The sander is designed to offer greater sanding consistency and a higher continuity of output on flat panels and Shaker doors, achieving a finish that Biesse says was only previously possible with manual methods.

The unit, partnered with a collaborative robot to offload the doors, was described as an “industry first” by Biesse.

On its timber construction machinery front, Biesse revealed that its Uniteam division will launch a new machine at Ligna next year, aimed at processing smaller timber sections and beams, including timber frame stud sizes. 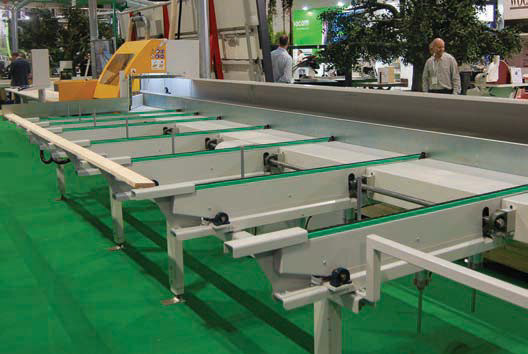 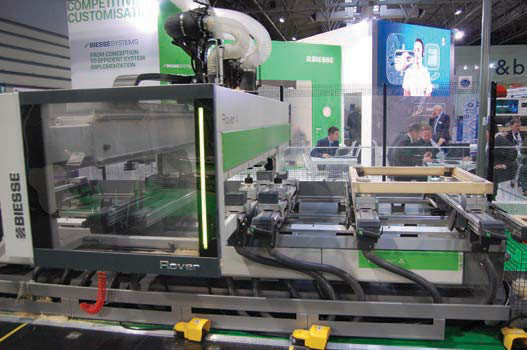 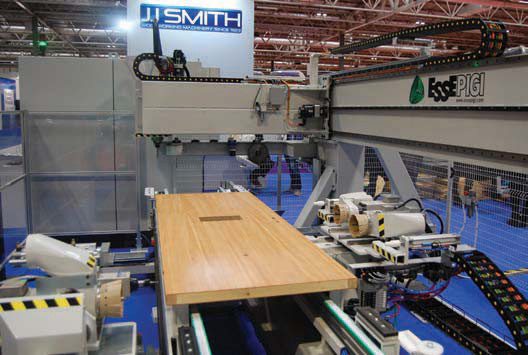 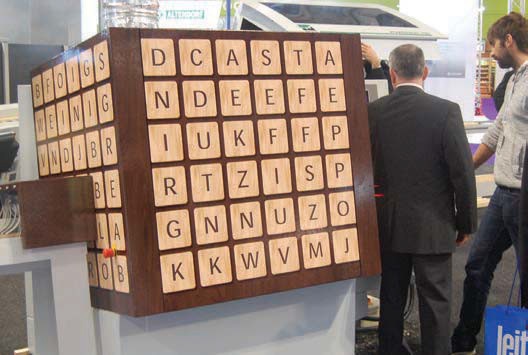