English Woodlands has carved out a reputation as a passionate hardwood timber merchant on a growth trajectory. Stephen Powney visited its Cocking site

Meeting him at the company’s site in Cocking, deep in the Sussex countryside, he says a quality bottle of wine could cost a buyer £230.

To pay that, he added, you’d want to know a lot of information about the product, where it came from and that it had been properly stored and looked after.

“Why do we not do the same thing for a piece of wood at the same price?” he added.

This passion for all things timber and emphasis on attention to detail where each piece of wood is unique and that customers need easy access to products and their data has been a hallmark of English Woodlands in recent years.

When he moved to the UK he was not involved in a timber business but he found his children attended the same school as existing English Woodlands director and owner Tom Compton.

Mr Compton’s business partner had left, leaving the door open for another shareholder to come on board. An opportunity to get into the timber business again was a strong pull for Mr McNally who has since thrown himself into the role with great energy. The company has focused on streamlining the site at Cocking, growing the e-commerce offering and developing a bespoke Stock and SOP software system.

At the same time Mr Compton has been focusing on sourcing the best quality home-grown, European and American timbers for furniture, joinery and building works. There is an enviable stock of airdrying boules. He also leads the company’s stand alone forest management and round timber harvesting activities.

TTJ’s visit to English Woodlands stems from the latter’s recent investments. It is definitely not a company standing still, as can be seen from its growth curve.

Sales have achieved a 100% growth over the past four years, with air and kiln-dried English species big sellers and a point of differentiation: one third of the company’s sales are English species. Last year sales of oak alone increased by several hundred thousand pounds.

Customers include furniture makers, joinery companies, merchants, contractors and the general public. Retail fit-out specialist ITAB, Benchmark Furniture, RW Armstrong and Gaze Burvill are just some of the companies it is helping source the right timber to support their businesses.

Typical projects are bespoke individual developments such as multi-million pound homes and restoration jobs, such as chestnut cladding at Netley Chapel, Royal Victoria Country Park for contractor the Brymor Group.

As well as the UK, it also sells around the world – to the likes of Spain, Ireland and the US. Earlier this year, a £37,000 order was sold to the US.

The amount of timber being stored at Cocking is growing. Square edged timber and boules abound here, with drying and further processing operations taking place on site, including machining of a large range of internal and external cladding profiles. Logs are no longer sawn on site, instead being processed at Helmdon Sawmill in Northampton.

About 60% of business is oak, with one speciality of English Woodlands being Super Prime square edge oak FSC 100% boards from Croatia.

These boards are renowned for their clear and high quality appearance and are available in thicker sizes and long lengths – up to 100mm thick boards and 400mm wide. Fresh sawn oak beams are sawn to order from France while other species in the warehouse during TTJ’s visit included US black walnut, Scottish elm, German beech, European walnut and English cherry.

“We are attracting some of the high-end furniture manufacturers that are trying to create something unique,” said Mr McNally.

Presentation is a big focus for English Woodlands, with timber stored in length, width and thickness areas of the warehouse to make boards easier to locate.

Customers are allowed to select their own timber and this personal selection policy, mirrored on its website, is a relatively unique service operated by the company, according to Mr McNally.

“Kitchen, furniture and joinery manufacturers like the fact they can select their own timber,” he said.

The company also has a retail area in the warehouse containing about £60,000-70,000 worth of timber boards.

Mr McNally said every piece of timber had a value and was either sold or used in the facility’s wood fuelled boilers.

Last summer the company, aided by a grant, expanded the shed to fill a gap between the warehouse and the machine shop, giving more storage and helping to manage distribution better.

The machine shop features a Weinig six-head moulder and two Wadkin straightline edgers, one of which was added last year, along with a Salvador cross-cut.

There are plans to invest in another Weinig moulder as production capacity increases. Overall the investment in 2017 was around £150,000, while wider investment over the last four years has been £600,000. It has stock now valued at over £1.1m and has doubled staffing levels.

“Our mission is to be one of the best specialist timber merchants, supporting both end customers and others in the trade needing to cover difficult and unique specifications.”

Crucial to the operation is its own bespoke ERP (enterprise resource planning) system which gives visibility on costs, margins and stock levels.

Power of the Internet

Something that is aiding English Woodlands’ growth is its focus on online sales and social media engagement.

A new website, launched in October 2017, gives detailed photos of products for purchase, including an online magnifying tool to allow customers to look at wood grain and detail. Every piece of timber has a unique number.

“We get people coming with lists of boards from the internet,” said Mr McNally. “This process is unique to us. We have brought product to the front of the website.”

The company’s Twitter page has over 4,100 followers and is described by Mr McNally as its most successful digital channel. And its 1,900 followers on Instagram help reflect the “personality” of the brand.

The power of video is demonstrated by 21,000 views of a short film at the site by Woodlands TV.

With so much UK hardwood being sold by English Woodlands, it is not a surprise to learn the company is a great believer in the industry’s Grown in Britain campaign.

A Grown in Britain consortium, led by English Woodlands Timber, was awarded funding by the UK’s innovation agency, Innovate UK, several years ago to explore how hardwood supply chains in the UK could be improved.

The key aim of the project was to improve the flow of hardwood timber from UK woodlands, so that the experience of the end customer is improved.

All in all, English Woodlands’ passion for hardwood and innovative approach to running a timber business looks set to help its strong growth curve continue.

English oak is a big seller 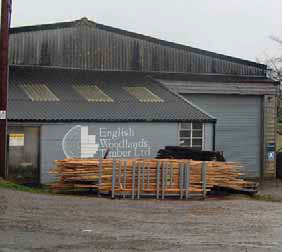 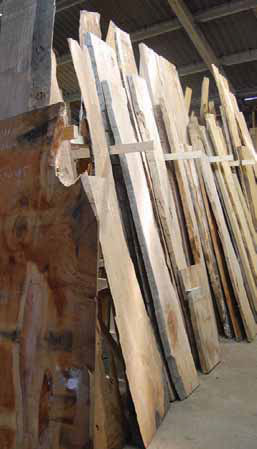