Foreign secretary, Jeremy Hunt, and ambassador of Latvia to the UK, Baiba Braže, lit the lights of a Latvian Christmas tree this week to mark the country’s 100th year of independence and celebrate the continuing strength of UK-Latvian relations.

Marked with a special performance from the London Latvian Choir, the 13ft Latvian spruce was installed in the main lobby of the Foreign & Commonwealth Office’s Lancaster House after being transported over 1,500 miles from Valka, Latvia.

Beginning its journey in a Latvian forest nursery, Romfords, the tree was delivered to the Latvian sawmill of BSW Timber before being transported to the UK.

“We are delighted and honoured to have been involved in the logistics of delivering this magnificent Christmas tree,” said Hamish Macleod, director of public affairs at BSW.

“We must send a special thanks to DB Schenker who transported the tree from Riga to Carlisle and S&R Smith & Son who completed the final stages of its journey from Carlisle to Lancaster House.”

Thanking Hamish Macleod and the BSW Timber Group for the assistance provided to get the Christmas tree to London, the foreign secretary Jeremy Hunt praised the company’s work in Latvia and said that the government is committed to maintaining trade and investment between the two countries without barriers.

As one of the first countries to recognise Latvia as an independent state, Mr Hunt celebrated the historical ties of both friendship and business between the UK and Latvia and talked of a continued relationship with the country. 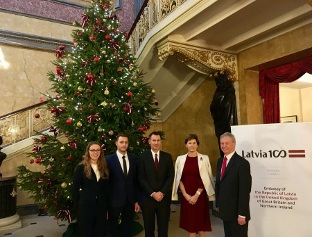