Southern Grove is only the second office developer to enter the area, following British Land’s purchase of its first home for the flexible workspace brand, Storey, in the same road.

The 4,530m2 scheme in Orsman Road backs on to the canal. Southern Grove has exchanged contracts on the land and plans to use Cross Laminated Timber (CLT). This will result in a six storey development which is approximately four to five times lighter than a traditional building, resulting in much smaller foundations and minimal disruption to the neighbouring canal. Architects Waugh Thistleton were chosen specifically because they are market leaders in CLT design and have built a reputation as the foremost architects in this part of London.

The prime site — a former factory — could be attractive to commuters, being only a mile from the City and just a five-minute walk from Haggerston railway station. It also offers ample nearby outside space, situated a stone’s throw from the popular Kingsmead Basin and moments away from Shoreditch Park.

Southern Grove plans to allocate around 10% of the office floor area (400m2) to ‘affordable’ office space and the building incorporates a substantial 100-bicycle storage facility on the ground floor with additional visitor cycle spaces in front of the building.

“This is a great example of a prime development, sustainably built on an infill site that really makes the most of its surroundings.” Said Tom Slingsby, Southern Grove chief executive.

“Shoreditch sprawl means that demand is moving towards attractive neighbouring areas and the canal is an obvious draw. The glazed facade to the property is designed to embrace what the canal has to offer, providing one of the most attractive canal-front aspects to be found in central London.

“We’ll be only the second developer to take advantage of a great opportunity to provide superior office space in an area that is being talked about as the next big thing now central Shoreditch has reached saturation point.” 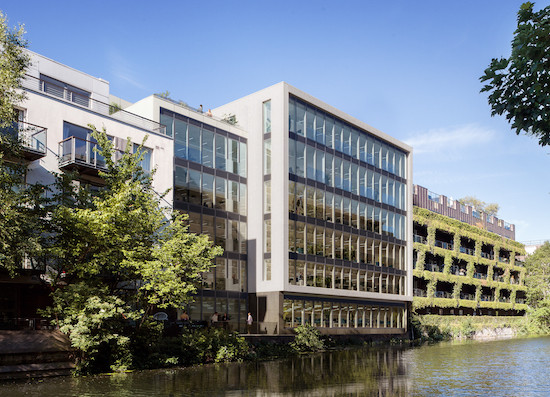