5,000 seat stadium for Forest Green Rovers in Gloucestershire, has finally been given the go-ahead following appeal and several amendments to the project to win over the planning authorities.

Designed by architects Zaha Hadid the 5,000 seat stadium will be built almost entirely from timber and offer every seat an unrestricted view of the pitch. It will be the only construction of its kind in the world and the overall project will include the planting of 500 trees and 1.8km of new hedgerow.

Changes made to the original application to help the appeal were the addition of an all-weather 4G training pitch which can be accessed by other local clubs, a revised landscaping plan and improvements to noise abatement and car parking.

Forest Green Rovers Chairman is Dale Vince, the owner of green energy firm Ecotricity. The League Two side are the only football club in the world to be certified by the UN as carbon-neutral.

‘The really standout thing about this stadium is that it’s going to be entirely made of wood – the first time that will have been done anywhere in the world,” said Mr Vince, when choosing the Zaha Hadid Architects proposals three years ago.

‘The importance of using wood is not only that it’s a naturally occurring material, it has very low carbon content – about as low as it gets for a building material.”

The stadium will be built entirely from timber 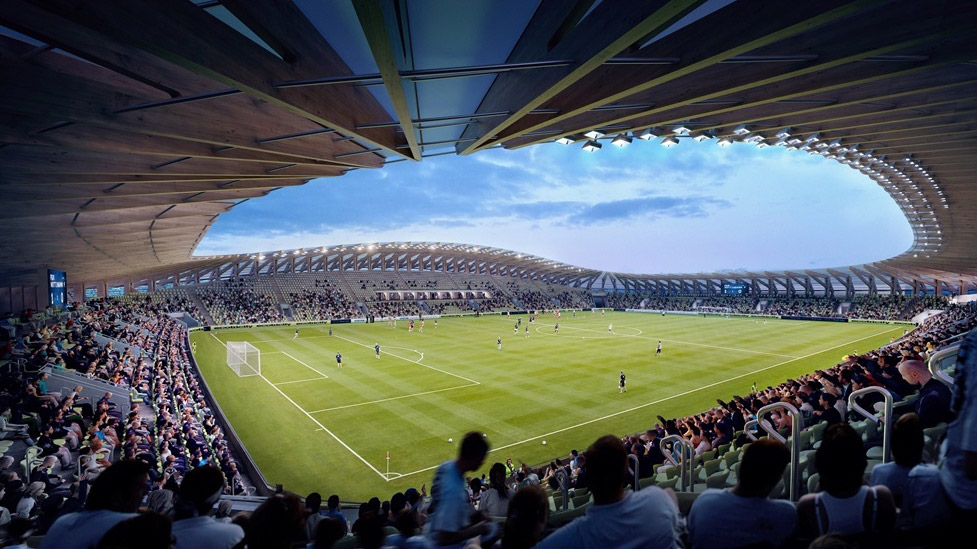 The stadium will be built entirely from timber