It all started with a conversation at last year's TTJ Awards between TV presenter and guest speaker Nick Hewer, TTJ editor Mike Jeffree and Francis Dalton, director of Website of the Year Award sponsor Daltons Wadkin.

Mr Hewer revealed his involvement in the Hope and Homes for Children Charity and his project to provide the means for James Conteh, a young man in Freetown, Sierra Leone, to make his own way in business by machining locally-grown timber and producing joinery for construction projects within the area. This was the subject of a Channel 4 documentary, Countdown to Freetown on April 7.

A Wadkin sawbench had been made available for the project but people on the ground had little or no experience of woodworking machinery, nor the necessary skills to install and safely operate the equipment.

However, when the connection was made at the TTJ Awards, Daltons Wadkin volunteered to send a technician out to Africa to install the sawbench and provide instruction to the operator, which would enable the equipment to be used safely and productively.

"I was delighted to be in the right place at the right time to assist Nick in getting this project up and running," said Francis Dalton.

Daltons Wadkin technical director Steve Balchin's African expedition started at 5pm on December 15 when, complete with toolkit, a supply of Wadkin hats and having had every injection known to man he boarded a plane for Casablanca. After several changes of flight he eventually arrived at Freetown in the dead of night, only to find that the contact designated to meet him had apparently fallen asleep and failed to keep the appointment.

After some chasing about, the missing person was located and Mr Balchin was able to travel to his hotel for a much needed rest. Here he linked up with Nick Hewer who travelled with him and a camera crew to the site the next day. This journey was "interesting" and potentially hazardous, with the team travelling in a convoy of four-wheel drive vehicles down roads that were little more than muddy tracks before arriving to find a Wadkin sawbench and generator waiting to be installed.

Missing component
Mr Balchin quickly assessed the situation on site and discovered that an important piece of the generator had "disappeared". It transpired that somebody knew where it was and after a monetary transaction the item was returned, enabling him to connect up and test the generator and the sawbench.

Further time was spent on instructing the operatives and several trips had to be made to the site over a two to three-day period, not without some fairly hazardous events occurring, including a collision with a truck which nearly wrote off one of their vehicles.

Having emerged unscathed from this and mission completed, Mr Balchin was able to fly back to the UK on December 18.

Subsequent to this trip it transpired that there was a need for a planing machine that could also be used in conjunction with the generator to machine 12in-wide African hardwood. The problem here was that a recent or current model planer/thicknesser was not considered to be strong or heavy enough to cope with the sizes and lengths of timber to be machined, so a search had to be made for an earlier and heavier duty machine which would cope with the work envisaged in Sierra Leone.

A vintage 16in (400mm) Wadkin type RM planing and thicknessing machine was finally located, checked over and tested by Daltons Wadkin and shipped out to Africa in early February. 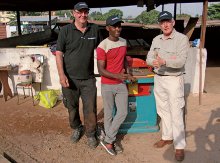 From left: Steve Balchin, James Conteh and Nick Hewer at the sawmill in Sierra Leone.