Over the past 40 years Lionex has established a reputation as a truly global hardwood trader. The Malaysian-based business not only services a worldwide market with a range South-east Asian timber, it also sources hardwoods from Africa and South and North America, including massaranduba, movingui, sapele, ipe, western red cedar, and a range of other species, for its international customer base.

"We think of ourselves as a global one-stop shop and partner for hardwoods," said Lionex European sales director Frank Teeuwen.

Now, he added, the company is aiming to reinforce and enhance that reputation with an important strategic diversification. This year it has opened its first manufacturing facility in Indonesia, near Jakarta.

"It's heavily focused on laminated and fingerjointed products, to enhance performance and make the most of the raw material," said Mr Teeuwen. "Plant includes heavy-duty finger-jointing and lamination lines, priming and assembly facilities - and it also has its own kilning capacity of 15,000m3 a year."

The timber used at the factory will be predominantly imported species, including sapele, sipo, western red cedar, louro preto, itauba, mukulungu and tali.

"Its customer base will also be global, but heavily focused on Europe," said Mr Teeuwen. "We're targeting the UK with decking ranges in South American and African species - in fact the first tali containers for the market have already gone. We're also marketing three-ply laminated sapele joinery components. This is a more difficult sell due to the lack of uniformity in component dimensions between window makers, but it's a market we believe we can cultivate."

Lionex says the factory will widen its customer base, give it added flexibility and help it capitalise on growing demand from processors and manufacturers worldwide for more finished, value-added materials and components.

Enhancing its prospects, all output will be covered by third-party sustainability and legality verification to a range of schemes, including FSC, PEFC, MTCS, TLTV, OLB, VLO and SVLK. It also has an ongoing programme for both its timber suppliers and customers to explain and simplify their obligations under the EU Timber Regulation. This includes a credit card-sized foldout pocket guide, which it is handing out worldwide.

And underlining its confidence in its latest diversification and overall international strategy, its long-term plans include adding another two production facilities in South-east Asia. 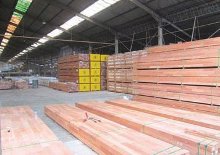 The new factory is a multi-range building components production unit