The UK’s timber processors are making inroads into market share and, if the commercial forest estate can be protected and expanded, the future looks rosy. Confor chief executive Stuart Goodall reports.

On the whole, UK mills are performing well at a time of continued weakness in the wider economy. The improving quality of UK timber products and the ability to deliver to shorter lead times are long-term strengths of the domestic industry, while the weak pound has been a positive short-term factor. The pound has recently been hovering around €1.17 (€1.45 in 2008), with the Swedish krona also strong.

The remarkable growth of the domestic industry's share of the UK sawn softwood market - now at a record peak of over 40% - is a great news story. A similar story can be seen with wood panels, with production up and exports increasing. The growth in production has been closely linked to increasing softwood supply (from forests planted last century), as well as to major investment. While current market share may be exaggerated by the shrinking size of the UK market, the underlining trajectory for the industry is upwards.

Significant additional sawmill capacity has come, or is coming, on stream, including at James Jones & Sons at Lockerbie, BSW at Fort William and Charles Ransford & Son at Bishops Castle. Significant reinvestment is being considered by Norbord at Dalcross and sawmills, such as Pontrilas, continue to reinvest successfully to offer a range of quality products.

The UK industry has scope for continued growth as current forecasts of future timber availability signal expansion through until after the 2020s. At that point there is expected to be the beginnings of a modest contraction, although the industry is calling for action to tackle that.

Government forestry policy towards the northern half of Britain has been, until relatively recently, unnecessarily gloomy about the prospects for UK forestry and wood processing. It had expected a profile of increasing wood supply with insufficient market and had, therefore, not acted to protect the commercial resource for the future.

Industry investment
In practice, industry has invested, market share has been secured and now we need further action to reverse a misguided approach and to rejuvenate commercial planting and to further protect the existing resource. Confor is in the process of rolling out a lobbying campaign in Scotland on this very point.

Increased domestic market share has been secured, to an extent, at the expense of imported timber, and questions have been asked about the ability for that to continue, even as UK wood supply increases.

In 2007, pre-downturn, imports of sawn softwood satisfied 8 million m3 of the 10.7 million m3 UK market. Since then imports have reduced by nearly half and UK production has increased by over 300,000m3 against total UK consumption of about 7.5 million m3.

A specific concern, in the near future, would be a significant adjustment in exchange rates, which might accompany a resurgent UK economy. UK mills have consistently grown market share by providing customers with quality products and good service at competitive prices, but a stronger pound would make pricing more challenging.

This does not mean that domestic producers will ever entirely replace imports. The scope for domestic growth can be measured in hundreds of thousands of cubic metres, while a return to 2007 levels of activity would see an increase in consumption measured in millions of cubic metres.

Like all countries these days, the UK has to cope with pests and disease, and with governments seeking to anticipate climate change by pressing for diversity in tree species. The high-profile media coverage of Chalara on ash can also suck up scarce resources in the Forestry Commission (FC) and elsewhere, meaning that insufficient attention is placed on commercial conifers.

That said, the industry mainstay Sitka spruce (50% of the UK softwood resource and a far higher proportion of sawn timber) is proving resistant and continues to perform well. Phytophthora ramorum is affecting larch, traditionally a minor component of the industry resource, while Dothistroma needle blight continues to affect pine. Much of the pine resource is not managed for wood production so its impact on the market is more limited.

Impact of climate change
The industry is also considering the potential impact of climate change on trees. Some of it will be positive as warmer weather and higher levels of carbon dioxide promote growth, and this can complement ongoing research into identifying and planting improved seed to yield a better future crop. Changing local climates may affect the suitability of species to sites, however, resulting in some likely movement of species around the country.

It is vital that guidance on what trees to plant where is founded on practical experience with input from industry experts, and Confor is working with the FC, growers and millers to put such information together.

A simple response to climate change is to recommend reducing risk by planting a variety of tree species within a more mixed species forest. However, forest management has to remain financially sustainable and that means growing trees that the market wants in quantities that provide for critical mass, both for the grower who has to cover costs of harvesting and replanting, and for the miller.

Change is a constant now, but not always for the better. UK forestry is an area where government has retained a very interventionist role - the felling of trees is licensed by the state, and new planting and replanting is 'approved' with reference to the government's UK Forestry Standard. This has created occasional tensions between the state and the sector, the regulator and the regulated, but it has at least been overseen by a body in Great Britain that understands the complexities of forestry - the Forestry Commission.

Merger now appears to be the fashion. The FC in Wales has disappeared into a new body with environmental regulators who may have little appreciation of economic sustainability, and a consultation is taking place on a similar approach in England. The industry and environmentalists have combined to lobby the UK government and it is hoped that politicians appreciate that the impact of merger is likely to be negative, as well as running the risk of creating another public backlash.

The industry needs government and the public to understand the overwhelmingly positive role that wood production plays in our forests and in wider society, and that message has always been difficult to get across. The emerging Grown in Britain campaign should assist here. We need a fresh approach to forestry with a focus on securing sustainable income from sales of wood and on changing attitudes - regaining a UK wood culture. This campaign, with support from major retailers and building firms, as well as environmental NGOs and major charities, could make that difference.

Grown in Britain week
Public perceptions of forestry and wood milling are normally wide of the mark, lacking an appreciation of the modern technology used, and the environmental and social care displayed by businesses. With the focus on a Grown in Britain week in October 14-20, and organisations with huge public outreach involved, the industry has an opportunity to get a positive, more accurate message over to the public.

The campaign also seeks to attract significant new funding from CSR budgets to support new planting and woodland management, both benefiting the environment and increasing wood supply for the short and longer terms. This can be carbon money, but also funds devoted to promoting what is known in public policy circles as 'eco-system services' - the public benefits that can be secured, for example, by bringing unmanaged woodland into responsible activity.

In recent decades, the UK industry has focused on building its activity, as the world around it has changed. This focus has brought growth, increased employment and more income to support our valuable forests. More visible and effective promotion of the sector has assisted, and now we want to make a step-change in securing valuable public (and consumer) support for a vital, and growing, 21st century industry. 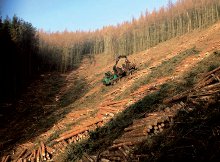