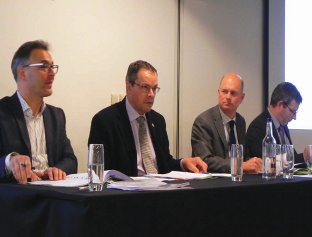 Strategic thinking 20 July, 2016 The TTF has set out its strategy for the future, one that will see it add value to all its activities. Sally Spencer reports > read more

UK agencies ready for FLEGT licensed cargo 20 April, 2016 After a long wait, FLEGT licensed legally assured timber is expected to arrive in the EU, and most likely the UK this year. Mike Jeffree reports on the preparedness of the UK authorities

Going with the Grain 20 August, 2015 Timber in furniture making has an incredible past – and promising future. Keren Fallwell reports

Big Brands back EU Battle against Illegal Timber 20 June, 2015 Some of Europe’s biggest consumer brands in timber products not only back the EU Timber Regulation and wider anti-illegal timber measures, they want them to be tougher and wider ranging. Mike Jeffree reports.

Widening the scope 22 December, 2014 WWF-UK’s Forest Campaign aims to influence the business community, the public and the government on sustainability issues – and to encourage a tightening up of the EUTR. Sally Spencer reports.