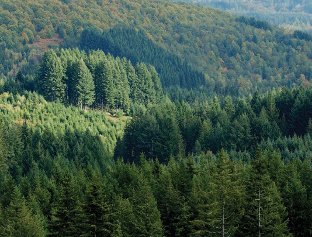 Species for all seasons 20 July, 2016 A surge in Douglas fir is on its way in France, and it needs new markets, with the UK seen as a hot prospect. Mike Jeffree reports > read more

Ecobuild:Grown in Britain inspires businesses and Defra 22 March, 2014 Government and blue-chip company approval for Grown in Britain was aired at an Ecobuild conference tackling the issue of nature's relationship with business.

Built and Grown in Britain 08 March, 2014 There is major potential for increasing the use of home-grown timber in UK construction, but it needs work and commitment, says Simon Smith of structural engineers Smith+Wallwork

Home-grown softwoods are put to the test 01 June, 2013 TRADA and BRE are researching the durability of British-grown softwoods and the impact that both geography and incising can have on extending service life. David Castle reports.