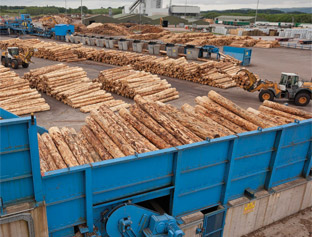 Onwards and upwards 20 September, 2016 The British-grown timber sector is determined to make the best of the decision to leave the EU. Sally Spencer reports > read more

Timber’s seat at the table 19 August, 2016 It goes without saying that timber plays an integral role in the furniture sector and for some manufacturers the love affair runs deep. Sally Spencer reports

Butterfly takes off 19 August, 2016 A Sunderland roof truss producer is moving into timber frame thanks to newly installed technology

Species for all seasons 20 July, 2016 A surge in Douglas fir is on its way in France, and it needs new markets, with the UK seen as a hot prospect. Mike Jeffree reports

Pressure on creosote 20 May, 2016 Creosote has long been a high performance method of preserving timber, but ever-tightening
regulation on its use is causing some to look at alternatives, reports Stephen Powney

A new direction 20 April, 2016 Sustainable building show Ecobuild once again opened its doors to construction professionals and although it was a smaller show this time, it did feel busier, reports Stephen Powney