Hitting the nail on the head

Initial research focused on cross-laminated timber and this has continued to be the most important element of the WPIG programme because of its strong potential for industrialscale off-site production from a central manufacturing facility.

However, the opportunity to carry out parallel R&D on other forms of solid timber panel - particularly non-glued systems that could be produced closer to both forest and sawmill - was also central to the project's underlying agenda to raise the added value of the timber resource in Scotland.

The target number of new products or construction systems was far from arbitrary and none of the work by the WPIG team has been done in isolation or purely as an academic exercise - in every instance projects have been delivered in close collaboration with SMEs representing different aspects of industry, whether from the forest, processing, manufacture, design or construction sectors.

A good example of this cross-sectorial approach is the development of nailed stacked plank systems, or Nail-Lam as it is now called, in order to distinguish it from cross-laminated (Cross-Lam) or dowellaminated (Dowel-Lam) systems.

Nailed stacked planks were the precursor of the cross-laminated timber products that have become increasingly popular in recent years, and were developed in Switzerland in the 1980s in response to overproduction in that country's forest sector and to make use of the considerable volumes of low value timber anticipated as a result. While there are now a few commercial Nail-Lam manufacturers in Europe, the product is not generally exported since one of its primary virtues is its capacity for local, small-scale manufacture. It is also generally a simple stack system connected with aluminium nails to allow for subsequent CNC machining.

The opportunity to explore nailed stacked planks as a low-tech, commercially viable product came as a result of work by David Blaikie Architects to create a prefabricated service core for housing the practice had designed for Scotland's Housing Expo in 2010.

Mr Blaikie's idea to create a fully plumbed timber structural core - dubbed eCORE - was developed further when he was invited to submit a competition proposal for three houses at the Affordable Housing fair in Dunfermline, Fife. The project brief prescribed the footprint and elevations for the houses: the challenge was to provide innovative systems to build them.

Mr Blaikie approached the WPIG team at Edinburgh Napier University and was brought together with Glasgow-based Kraft Architecture which was developing 'K2', a highly insulated, prefabricated wall system using Scottishgrown timber, and a floor truss system being developed by Ochil Timber. The subsequent use of all three products in the Affordable Housing project became a built demonstration of three WPIG supported developments.

Working together, the two architectural practices redesigned the plans to align shower, bathrooms and kitchen services in each of the houses to facilitate the installation of a vertical service core. During this process the stacked plank construction option presented itself and, in conjunction with Living Solutions, a Fifebased social enterprise, a series of prototype panels were manufactured.

Edinburgh Napier University's Centre for Offsite Construction & Innovative Structures then carried out racking, bending, point load - and later - fire tests on the panels to optimise their structural and construction potential. Following this, nailed stacked plank panels were produced respectively for each of the three houses by Makar Ltd, Springfield Homes and Living Solutions, with the latter forming them into finished cubes.

Interested in developing the stacked plank system further, David Blaikie Architects found another opportunity to apply the technology in a new house extension where the system's low depth-to-span ratio provided a successful solution to a room height problem.

A second house extension followed, this time for a client who liked the qualities of wood but preferred home-grown timber rather than imported C24. The idea to employ nailed stacked planks in its construction was further sold on the basis of the thin fascia lines made possible by the slim panels. Yes, there is more wood used in this type of construction than in conventional timber frame (600-700 linear metres as opposed to 150) but the cost is offset by the enhanced carbon storage offered by the solid wood as well as the savings to be made from dispensing with wall and ceiling linings.

Interestingly, while eminently suited to prefabrication, the panels in this instance were made on site as the rear of the existing house was inaccessible to cranes. Nevertheless, the final product not only works well and looks good, it - together with the eCORE - offers considerable food for thought on the potential for a low-tech solution like Nail- Lam in future house construction. 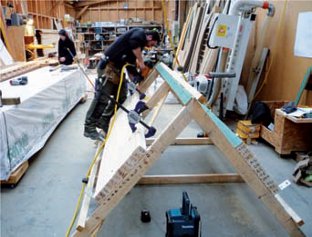 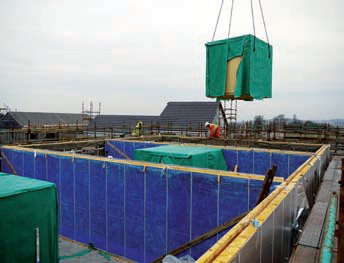 An eCORE unit being installed at first floor level