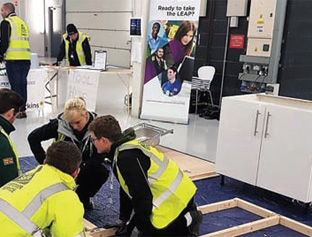 Price over patriotism 20 September, 2017 Processors of British-grown timber are keen to take advantage of currency exchange rates and to invest in capacity and value adding. Sally Spencer reports

London calling 20 June, 2017 The Plywood Club of London has stayed true to its founding principles while also changing with the times. Keren Fallwell reports

FLEGT Licensing boosts customer confidence 20 June, 2017 Three months on from the arrival of the first FLEGT-licensed timber products in the EU from Indonesia, Mike Jeffree asked three well known Indonesian suppliers and three of their EU buyers about its significance and what longer term market impacts could be

Mod Cons 20 June, 2017 Applications for chemically-modified wood are growing all the time. We take a look at some inspiring examples

Södra Expands UK Possibilities 20 June, 2017 Södra’s Värö site is a true giant of the Swedish sawmilling industry, with around half of its production destined for the UK market. Stephen Powney talks to Södra Wood’s management at the mill

Onside with offsite 20 February, 2017 The UK house building sector finished 2016 on a high and offsite manufacture is in the news. Sally Spencer reports

Time for Technology 20 September, 2016 The W series woodworking technology exhibition has built up momentum over recent shows, with 2016’s W16 event set to be a further step up in size, reports Stephen Powney

Onwards and upwards 20 September, 2016 The British-grown timber sector is determined to make the best of the decision to leave the EU. Sally Spencer reports

The “science” of buying and selling 20 September, 2016 Timber pricing has a ‘wood’ science aspect – economics, psychology and sociology all playing a part in the equation. So is the timber trade capable, by application of those sciences, of change for the better? Andrew True, a recently retired trader himself, says yes

Diverse designs 20 September, 2016 The wood flooring sector is responding to changes in design trends with some inspiring new products and projects