The American Hardwood Export Council's headline-grabbing showcase projects are more than a shop window for US hardwoods. They express its conviction that the timber industry must engage with architects and designers to develop market share and the technical potential of its products.

All AHEC's major promotions have been designed for dual impact; to make people stop and stare, then, on closer inspection, discover there's more to them than meets the eye.

2009 saw the US tulipwood Sclera Pavilion, created for the London Design Festival (LDF). A mass of suspended interconnecting vertical sections, it lured passers-by with its play of light and shadow. But it also demonstrated that a species generally perceived as an interior paint grade, could be used structurally and, if correctly processed (in this case hot oil treated), was equally at home outdoors.

Similarly the 16m-high US red oak Timber Wave coiled around the entrance of London's Victoria & Albert Museum during the 2011 LDF hooked people with its audacious latticework design. But it also explored the species' potential in innovative laminated engineered form for construction.

Last year's Endless Stair marked another step up for AHEC's LDF projects, both in terms of exposure - it netted press coverage equivalent to US$2m of advertising - and pushing technical boundaries. It used No. 2 common tulipwood in cross-laminated sections to create a series of interlocking stairs rising to 7.7m outside the Tate Modern. This clearly showed that even lower grades of one of America's most prolific (and therefore most sustainable) species have high-spec structural possibilities. And underlining AHEC and engineer Arup's confidence in its performance, they allowed people to climb it. In fact they've since shown even greater faith, as the stair was remodelled as Scale Infinite for Milan Design Week 2014, with the longest flight extending even further.

What further draws these projects together, and underscores AHEC's marketing philosophy, was that they not only targeted the architect, design and specification community; they were designed and developed by architects; David Adjaye in the case of Sclera, AL_A the Timber Wave and dRMM Endless Stair.

"What drives our involvement in these projects is that architects and designers are strategically key figures in our market," said AHEC European director David Venables.

"They influence decisions and choices made by contractors, builders, the client, end users, even consumers. But timber is still very poorly covered in their career training, so we need to inspire and inform them about its aesthetic and technical potential. And why we effectively put ourselves in their hands is because nothing interests an architect and designer so much as the work of other architects and designers."

Expanding on his theme at the recent Spanish Timber Importers Association AGM, Mr Venables explained that AHEC's strategy is also born of necessity.

"Many old solid wood-using manufacturing industries have migrated to new materials, so we must find new markets and uses," he said.

"Architects and designers can make a significant contribution to this. They're trained to solve problems and use the right resources to achieve the desired results, and adding to the value of engaging with them is that they challenge us. They ask have you thought of doing this with timber, or why can't we do that? It can lead to applications we, as suppliers, haven't even considered.

"We may be knowledgeable and passionate, but we're not always the most creative industry. Would we have thought of multistorey apartment blocks in cross-laminated timber (CLT) for instance? But an architect did and now large-scale CLT construction has significant momentum."

Creative ambassadors
Once converted, creative professionals can also become ambassadors for timber "and do more to promote wood than the industry itself".

"They're natural, passionate communicators and the architects we've worked with can have huge influence on the market," said Mr Venables.

Besides its showpiece displays, AHEC believes demonstrating timber's use in real life buildings and products is also key to winning over the construction professions. Hence its database of projects featuring US hardwoods and its backing for the Wood Awards, which each year generates a wealth of new case studies. And it's keen to encourage the rest of the timber sector to follow suit and "follow wood to market".

"It's invaluable for highlighting timber's capabilities, as well as keeping us informed on how it's being used in the market, or misused, which can be equally useful," said Mr Venables. "Although the situation is improving - with Arnold Laver's hugely welcome new backing for the Wood Awards underlining growing industry focus on how products are applied - it's not something we're traditionally good at as a sector. How many TTJ readers know where that last pack of maple ended up?"

Broadening architects' and designers' appreciation of US hardwoods' environmental performance is also on AHEC's agenda.

"But there's a risk of us concentrating too much on certification. FSC timber, for instance, can be used in an entirely environmentally inappropriate way. It's a much wider debate. We need to convey the whole picture on sustainability, carbon performance and so on."

A key outcome of AHEC's focus here was its extensive US hardwoods life cycle analysis (LCA) project, undertaken by PE International. And from this grew its Out of the Woods project, which challenged Royal College of Art students to create a chair in American hardwood using the LCA data to minimise environmental impacts, without compromising aesthetics or technical performance. And AHEC hints there will be more to come from this initiative.

The LCA figures are also being used in US hardwoods' new all-round green passport, the American Hardwood Environmental Profile, and have been shared with Wood for Good for its Wood First Plus LCA database.

"We're impressed with the Wood for Good campaign overall, but a key reason we decided this year to substantially increase our funding is the database - it will be a significant new platform to really communicate timber's environmental message," said Mr Venables.

"We're now looking forward to sharing our experience with them further and getting hardwood more into the Wood for Good mix."

Variety of species
Another vital thrust for AHEC is to increase the design sector's appreciation of the wider basket of US hardwood species.

"It's not all about white oak and walnut," said Mr Venables "Fifty per cent of our growing resource comprises red oak, soft and hard maple and tulipwood so we need to do more to raise awareness of these other species and their performance potential. This is not only good for the overall sustainability of US hardwoods, it gives the market a wider choice, and could see these species in new applications we hadn't envisaged."

A recent project forming part of this process was AHEC's challenge to five teams of designers from London's OKAY Studio to devise products for Clerkenwell Design Week in five US species: tulipwood, red oak, maple ash and cherry (see p7). AHEC won't yet reveal the results, which will be on display at Clerkenwell's SCIN gallery in May, but is clearly impressed.

"There's a real diversity of ideas, underlining that these species have potential for much wider use in contemporary design," said Mr Venables.

AHEC's work to develop use of lamination and heat treatment with US hardwoods is also aimed at making the most of the resource and widening the designer's choice.

Meanwhile heat-treated US hardwood is already a commercial reality, used in exterior products such as windows and cladding. And AHEC expects to generate more interest from its research work and promotional efforts. In the latest of the latter, its Octopus structure, designed in natural and heat treated tulipwood by Adam Khan for Wallpaper magazine's 2013 Workspace event, was remodelled as a juice bar by architect Carl Turner and sculptor/maker Adam Kershaw for the publication's Handmade show at Milan Design Week.

And AHEC's mission to "befriend an architect" continues. A further, as yet undisclosed, project is planned for this year's LDF. Then, in October, the exercise moves up another scale when AHEC sponsors the inaugural Wood Excellence Prize at Singapore's World Architectural Festival. 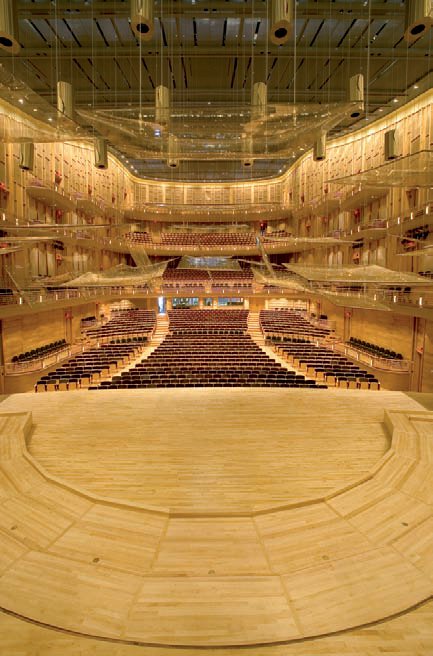 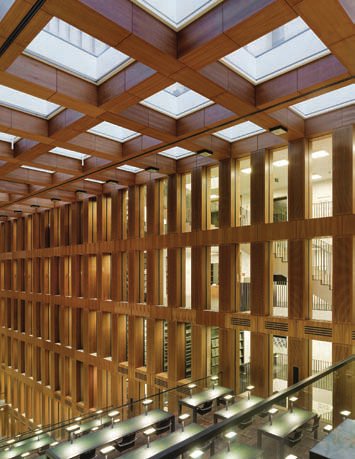 US cherry and walnut at Berlin library 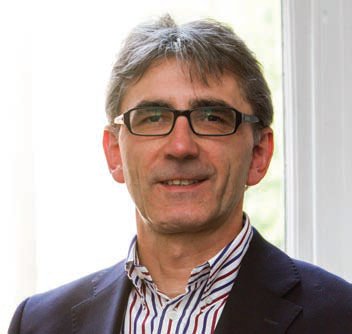 David Venables: “It’s not all about white oak and walnut” 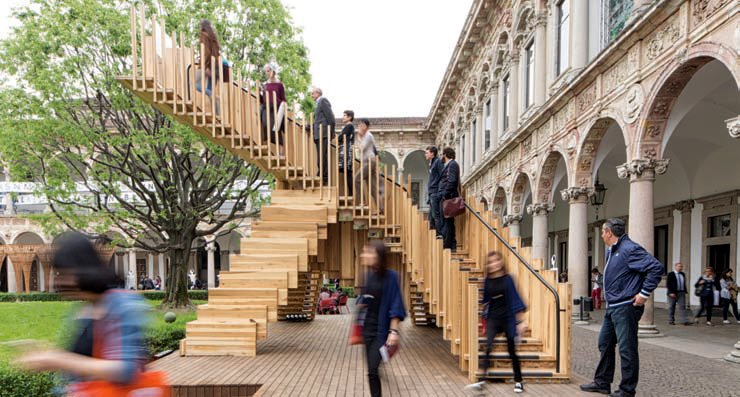 Scale Infinite in Milan, US tulipwood CLT and thermally-modified ash 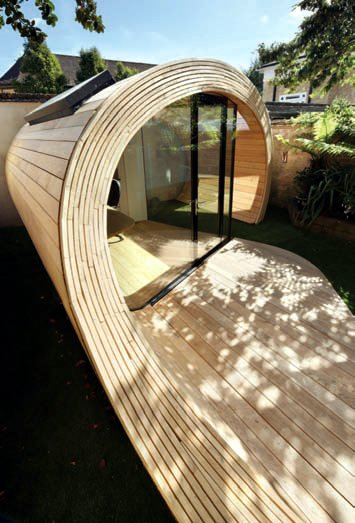