This year’s Carrefour International du Bois exhibition will be a mirror to the global timber sector, attracting exhibitors and visitors from around the world. At the same it promises an in-depth look at the dynamic and diversifying French timber sector. Mike Jeffree reports.

Exhibitors at this year's Carrefour International du Bois (CIB) clearly took the advice to book early to avoid disappointment. All stand space for the three-day biennial event was sold out in January, four months before it opens its doors to visitors on June 4.

In fact, France's timber, wood products and timber-based building world showcase was in the enviable, and probably rare position among trade shows of having an exhibitor waiting list.

"We were fully booked more than a month earlier than in 2012," said Sam Padden, international marketing executive of coorganiser Atlanbois. "This was despite the fact that there was a slight delay in the launch of our full marketing campaign, as Atlanbois relocated last year to its new award-winning timber-based headquarters in Nantes. We think this bodes very well for the success of the exhibition."

According to Atlanbois, the competition for stand space also underlined that the CIB, which continued to grow through the downturn, now ranks among the main events of the global timber industry calendar. Further evidence for the claim is that the biennial exhibition, held in Nantes' Parc de Beaujoire trade fair centre, is bigger and more international in scope than ever. In 2012 it grew by 10%, and this year it adds a further 2% of floor space. The exhibitor total of 530 is also a record, and the proportion coming from outside France matches 2012's all-time high of 30%.

Given exhibitors' enthusiasm for the event, the organisers are also confident that visitor numbers will also top the 10,000-plus who attended two years ago, and exceed their international spread. It expects 18% will come from abroad, drawn from at least 70 countries.

"To generate further international interest, we and co-organisers the Port of Nantes Saint- Nazaire have also undertaken an intensive marketing campaign in six of our visitor growth markets: the UK, Italy, the Netherlands, Algeria, Morocco and the Arabian Peninsula," said Ms Padden. "We're hoping for an increase from all of them."

Exclusive market focus
A key factor in the growing popularity of the show, say the organisers, is that in one crucial respect it has not departed from the formula it came up with on its launch 24 years and 13 exhibitions ago. It remains an event exclusively dedicated to the timber and wood products sector and has not allowed itself to be diverted into other associated materials, technologies and services. This undiluted focus, they say, holds attractions and value for all who attend.

"The visitors know that they will see an unparalleled range and variety of timber and wood products in both softwood and hardwood, from sawn goods, through panel products and components, to engineered wood and timber construction systems," said Ms Padden. "For exhibitors, the timber-only content means that visitors to their stand will only be serious timber buyers, specifiers and end-users."

According to Pierre Piveteau, president of CIB and sawmiller and timber products supplier Piveteau Bois, staying true to its timber-only heritage also means the show is well placed to ride the international wave of popularity the material is now enjoying.

"Thanks to its combination of carbon and technical benefits, and its use in ever more adventurous large-scale projects, particularly in construction, timber is trending as never before and demand is booming in all global markets," he said. "And growth is being further strengthened by the US economic recovery, and increasing consumption in an ever wider spread of countries in Asia."

Sticking with its 100% timber DNA, however, the organisers stress, has not stopped the CIB and its exhibitors moving with the times.

The CIB divides into three key product categories. The biggest is sawn and industrial wood products, which this year comprises a total of 300 exhibitors. "This makes CIB the leading European construction timber market place," said Mr Piveteau. "You won't find this concentration of exhibitors in any other show."

Acting as a magnet for architects, designers, contractors and property developers from across France and the rest of Europe, the interior and exterior design element of the exhibition comprises over 100 manufacturers and suppliers of panel products, cladding, and components for furniture and other interior wood applications.

"All the major European players in these sectors are attending," said Mr Piveteau. "Many are expected to use the show to launch latest products and new technical developments."

The rise of timber building

Going by recent CIB shows, leading the way in terms of new products and technical advances will be the Timber Techniques and Solutions area, which is dedicated to timber in construction and timber-based building products and systems.

Launched in 2006, this is now the fastest growing part of the exhibition, reflecting increasing awareness of timber's potential in energy efficient, high-embodied carbon green building. This year it features 120 exhibitors and occupies 10% more hall space.

"We're not only seeing a growth in exhibitors, but they're also putting on bigger and more impressive displays," said Ms Padden.

The focus, she added, will be firmly on providing the market with technical solutions "instead of just timber products", and this emphasis will be underpinned with the CIB's biggest ever conference programme.

With speakers including leading architects and other construction professionals from around the world, and including an international roundtable on "timber architecture and climate", this will look at the cutting-edge use of timber in building globally, and its potential for the future. The full programme is at www.timbershow.com/programme.

There will also be fact-finding trips to Nantes international high school, a 25,000m² timber, steel and concrete hybrid structure, and to Bâtiment B, the new cross-laminated timber and glulam-based multi-storey home of Atlanbois, which won an Archi Design Club Award for architect Barré Lambot. While the CIB is now a "truly international timber trading and networking platform", according to one exhibitor, it is also a sales channel into the French market and a shop window for the French timber industry. This, said Mr Piveteau, is also increasingly giving the event even more international appeal.

The country's forest and timber sectors, he said, are "generating a buzz as never before".

"The French timber and associated industries turn over €60bn, and are growing at 4-5% and investing €300-350m a year," he said. "The timber sector has also been selected by government as one of eight from a shortlist of 34 with greatest development and innovation potential, which should benefit promotion of timber's environmental advantages and greater industry synergy." To flag up the industry's wider capabilities to the international market, CIB will also feature a special display of its 40 latest products, where two new brochures, detailing the best French hardwood and softwood products for specific end uses, will be distributed.

"Internationally, most people associate the French timber industry with oak, but it offers a huge variety of species and different timber products, as visitors to the CIB will discover," said Ms Padden.

Exhibitors value expanding exposure
Exhibitors at the Carrefour International du Bois cite a range of reasons for attending the show, but timber focus and increasingly global reach are to the fore.

Belgium-based international importer Vandecasteele describes it as "the best timber fair in Europe".

"It's been growing since the outset and is now attended by suppliers and customers from all over the world," said international sales manager Genevieve Standaert. "This scope and the fact that there's no distraction from other building materials makes it unique and generates high-quality leads."

"It attracts visitors from across Europe and, together with the UK's Timber Expo and Germany's Interzum gives us the market coverage we need," said UK director Charles Trevor. "If anything, thanks to the fact it's 100% timber and wood products, it probably attracts more serious buyers than the German show."

Modified Accoya producer Accsys Technologies also regards it as "among the most important timber shows in Europe", with a reputation for showcasing "the future of wood". "That's why we'll be showing the range of Accoya end products, joinery, cladding, decking and structural beams, and provide a live demo of durability and stability testing,"

France-based international African hardwood and plywood distributor and producer Rougier also sees Nantes as a "definitive" international event, which is why this year its stand will bring together its teams from its newly-formed Sylvaco Panneaux plywood operation and those of its Afrique International arm, representing its production units in Cameroon, Congo and Gabon. It says it has saved product launches for the show and, will have news on its "extended 100% FSC programme".

Treatment specialist Osmose says exhibiting not only "further develops our relationships in France, but also provides us with a global communication platform".

"Its widening scope to encompass finished products alongside sawn timber has also increased its relevance and enabled us to showcase a broader range of solutions." 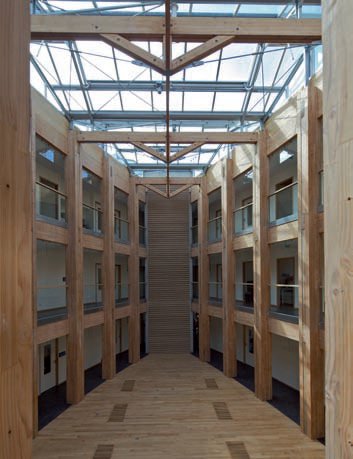 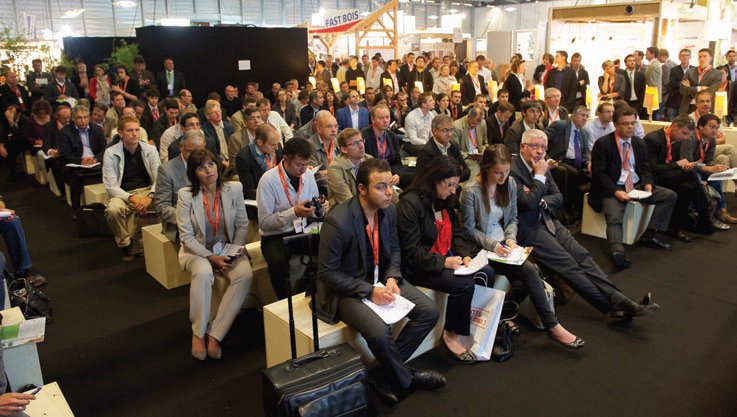 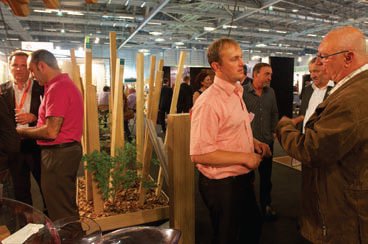 The show attracts visitors from 70 countries 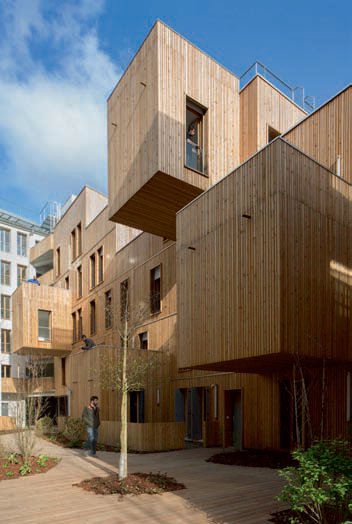