The timber was supplied by Piveteaubois and supported by France-Douglas – a key association promoting the use of French Douglas fir – and the sculptures set out to further the conversation about the capital’s mental health.

Multi-award-winning British designer Steuart Padwick teamed up with Time to Change – the mental health campaign run by Mind and Rethink Mental Illness, to create the sculptures – ‘Talk To Me’.

Mr Padwick designed the sculptures in Douglas fir to convey a “warmth and humanity in stark contrast to the strict cuboid shapes and ‘concrete’ blocks made from natural acrylic stone”.

“We are thrilled to be involved with Talk To Me,” said Elisabeth Piveteau-Boley, Piveteaubois export sales manager for the UK and Ireland.

“Timber’s natural and organic properties add a wonderful calming element to the design. The structure is made from sap free Douglas fir glulam, which is a naturally durable timber species that can resist the elements. The overall effect is stunning.”

The series progresses from the standing figure carrying the burden on its shoulders (seen on the cover) to resting against it – highlighting that whilst the burden may not be overtly visible it is often not far away.

As passers-by approach the interactive giant cuboid timber figures, a proximity sensor is triggered, and they begin to voice poignant and uplifting words.

These conversations start to crack the ‘burden’ to release a glowing light. The structures are to be moved permanently to Codie Dock in East London. 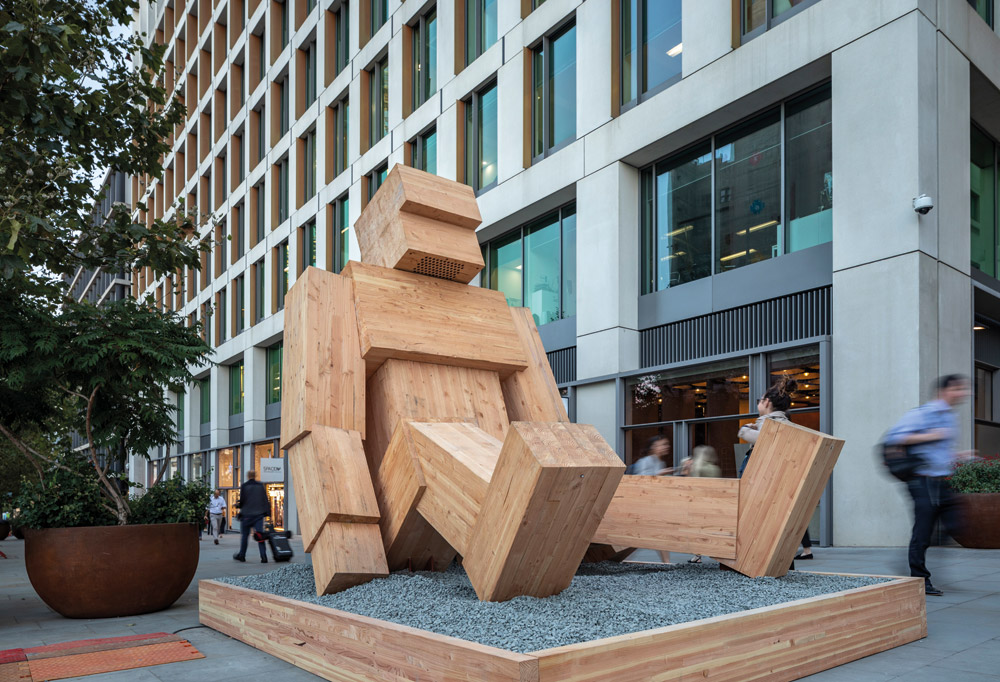