JW Timber has invested considerably in its modern approach to merchanting while holding fast to the best old values of the trade. Stephen Powney reports.

It's been hard work, with many sacrifices along the way, but as Kent-based JW Timber celebrates its 10th anniversary, managing director John Wardle can allow himself more than a little satisfaction.

Years of working evenings and weekends and taking calculated financial risks have helped build a £1.5m annual turnover merchanting business which has made a profit every year since starting in 2003.

Being voted TTJ Small Business of the Year in 2011 brought acknowledgement of the company's achievements to the wider industry.

And now the company, based on a rural site near Maidstone, has positioned itself for the economic recovery by completing a new mill, and it has plans for new offices.

It's clear from talking to Mr Wardle that he is passionate about the timber trade and loves the old-fashioned industry values, but he also wants to add a "modern twist" to business.

He is also frustrated with the time and cost of red tape and talks honestly of the pressures of running a small business and balancing work with family life.

The seeds for JW Timber were sown when Mr Wardle was working for Morgan Timber and was left £13,000 in his grandfather's will.

Guided by an ambition to strike out on his own and to do something worthwhile with the money, he launched JW Timber Ltd, signing a five-year lease on a site in East Farleigh.

Mr Wardle's wife Louise continued in her accounts job to help pay the mortgage and they set up their spare room to do the paperwork during evenings and weekends.

Day one wasn't an ideal start; Mr Wardle had an accident involving a fork lift, requiring surgery to his hand.

In 2006, Mrs Wardle left her job to give her full support to the firm and an opportunity arose to rent larger premises in nearby Marden. They ended up purchasing the site, remortgaging their home and selling 20% shares to his mum and dad to finance the deal.

A very poignant time followed in September 2009, when just as Mr Wardle was celebrating the birth of his son Jake, a major customer told him he was going into liquidation. What should have been a happy time focused on the baby was laced with concern about the potential impact of the bad debt.

But adversity was turned into opportunity by buying the customer's Weinig Variomat moulder and other workshop machinery from asset finance specialist Lombard.

Further investment followed, including the erection of a Rubb storage tent, a new Combilift fork truck and a bespoke computer software package from Ten-25 Software.

About 95% of the European oak is from Italian suppliers, with much of the raw material ultimately coming from Croatia. African timbers include iroko, idigbo and sapele, while among US hardwoods are white oak, ash, walnut and tulipwood.

Hardwood suppliers include NHG Timber, Timber Connection and CP Timber, with much of the stock carrying FSC or PEFC chain of custody certification.

Service focus
Good service is a big focus at JW and Mr Wardle can't understand companies that turn customers away. "At the point of first contact with the customer, we find out what their needs are to fit the right timber to their project.

"We will not be beaten on service," he said. "Forget about yesterday, it's about today and every order has to be right."

And this means always being open to new business ideas and products. "We never say 'we do not do that'."

An example is JW recently sourcing an African plantation teak worktop for a customer.

"People remember you for being helpful. You don't need to make a fast buck today; you will stand to gain in the future if you're patient," said Mr Wardle.

Most orders are mixed loads in small volumes, with same or next-day delivery.

The bespoke timber racking system in the main warehouse gives high visibility of each timber piece and allows customers to select what they want, as well as making JW's timber selectors more efficient.

Timber is stocked according to species in thickness categories, with dimensions chalked on the end of every piece to help customers.

"I believe every piece of timber has a use for something," said Mr Wardle.

To this end, all solid offcuts from the mill are selected and regraded, with many ultimately finding a specific end use. Offcuts that can't be regraded are cut for firewood.

Processing capabilities have been boosted by the new £250,000 mill, completed in June. It was built on land purchased from neighbour Blades Joinery but didn't come with planning permission.

"It was the most expensive car park in Kent," Mr Wardle joked.

The existing Weinig Variomat moulder, along with other machinery, was moved to the new mill, and Dust Pollution Systems installed a new extraction system.

"Having everything offered from a single source [through Daltons Wadkin] took a lot of stress out of the move."

The new mill means the company is ready for when the market picks up and Mr Wardle also wanted to take advantage of the government's recent tenfold increase to the Annual Investment Allowance, giving the company good tax breaks for capital investment.

JW's first major machined order for the new mill was about 18,000 linear metres of western red cedar cladding. The company purchased the wood especially for the customer and machined it to the required profiles in a contract which highlighted the potential production capabilities of the new facility.

Mr Wardle was determined the new facility would be clean and welcoming. Interior walls have been painted white to reflect light, a mill office is currently being added and a system has been invented to regrade offcuts and keep them off the floor.

"I want the old-fashioned values but with a modern approach. This is the modern twist," he said.

One recent mill job was processing short lengths of iroko for a London customer to make into benches.

"The Salvador easily copes with our requirements and indeed we are now seeing a huge increase in demand from customers wanting an accurate cut-to-length service, something we could never do before on a large scale," added Mr Wardle.

But running your own business is never plain sailing and Mr Wardle makes no secret of his frustration with the mountain of red tape faced by companies today, whether it be health and safety, insurance, VAT returns, pensions, planning permission or financial planning.

"I want to sell timber, that's why I came into the business. There's so much red tape, it adds pressure when you are a small business.

"You are one man split into 20 different roles whereas in a bigger organisation there would be 20 people carrying these out. All of these jobs are essential to businesses and all have deadlines. Sometimes you feel in no man's land."

He admitted the lack of support available for small businesses was challenging and it sometimes felt like he was on his own. Having a business partner in the current market would be attractive, he said.

But he praised supportive staff and said he was able to pick up the phone to friends and mentors in the trade to ask advice when needed.

Achieving a balance between work and family life is also challenging, especially when the working day is sometimes 5am-10pm.

Not frittering away company profits but reinvesting money in the business and keeping a tight rein on costs have helped build a secure operation. Ten years on from starting JW Timber, Mr Wardle still lives in the same house, though confessed he recently bought a new car.

Consolidation and investment
The last two years for JW Timber have been consolidation, not chasing unprofitable turnover but also investing with an eye to the future.

Mr Wardle said business had swung between feast and famine during the last couple of years but he has noticed an improved market in the last two months, albeit still very competitive. "Companies are fighting for a small pot. Instead of five wanting that pot, there are 10 now."

Future plans include building more permanent offices, while a new Falach briquetter has just been installed by International Woodworking Machines and a new van will be added in September.

"From a self-start with £13,000 this is where we have got to. I am at a crossroads; I probably have to employ a couple more sales and production staff and push on. But I do not want to lose our identity and our customer service," said Mr Wardle.

All in all, that's not a bad position for a small business to find itself in after one of the worst recessionary periods in recent history. 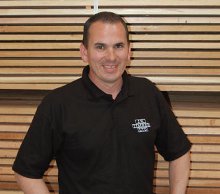 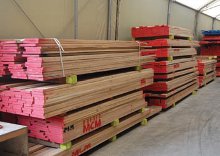 Italian oak in one of JW’s three storage buildings 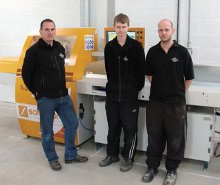 Processing iroko in the new mill