A major conference in Malaysia highlighted both the achievements of anti-illegal timber measures, and trade anxieties around them. Mike Jeffree reports

There was no dispute at the recent International Conference on Market Requirements for Timber and Timber Products (CMRT) in Kuala Lumpur: anti-illegal timber legislation and corporate green procurement strategies are increasingly reshaping the way the trade operates. There was general agreement too that this is causing concerns in the industry worldwide.

No-one questions the need for tough steps to eradicate illegal timber; but the anxiety is that they could also impact adversely on companies acting within the law.

The buyers' fear is that the expense and administrative difficulties of satisfying some measures could hit competitiveness, while suppliers are concerned, not just about compliance per se, but the potential bureaucratic complexities of dealing with varying anti-illegal timber approaches worldwide.

However, the CMRT also highlighted that, while anti-illegal trade measures may place additional burdens on the sector, there are also initiatives under way to ease compliance. These range from efforts to make illegal timber legislation more in tune with the business realities of the timber trade, to moves to harmonise different legality assurance systems.

The conference was jointly organised, in association with the Malaysian Timber Council (MTC), by the European Forest Institute's EU FLEGT Asia Regional Funding programme, the European Timber Trade Federation (ETTF) and The Forest Trust. Held the day before the MTC Global WoodMart Exhibition, it attracted an audience of 234, with 62 delegates from outside Malaysia.

Moderator consultant Christian Shriver underlined the continuing scale of illegal logging: "It's still estimated to account for 5-10% of the global wood market," he said. "That's potential annual revenue of US$60bn."

Vincent van den Berk, FLEGT Asia programme co-ordinator, told delegates that the first structured efforts to get illegal wood out of the supply chain were made by major consumer businesses last century. These evolved into public procurement policies, and ultimately today's "legal instruments". The latter include the US's Lacey Act, which obliges companies to take due care they are not trading in illegal wood, and the upcoming EU Timber Regulation (EUTR), which stipulates that from March 3, 2013 all "first placers" of timber on to the EU market (termed "operators") undertake due diligence illegality risk assessment of suppliers. Next will be the due diligence-based Australian Illegal Logging Prohibition bill (ILP).

Mr van den Berk stressed that ultimately it was down to buyers and suppliers to "stay ahead of the game" on latest legislation. But a growing number of wider industry initiatives were helping smooth the way, among them the EU's FLEGT Voluntary Partnership Agreement (VPA) scheme.

"Timber from supplier countries which conclude an Agreement [by undertaking to improve forest governance and assure timber legality] and backed by a VPA licence is regarded as risk-free under the EUTR, so doesn't need to go through further due diligence," he said.

Secretary-general André de Boer said the ETTF was also working to make EUTR compliance less onerous. Notably, it has taken steps to help align due diligence risk assessment across the EU. These include the creation of its own due diligence system for operators in countries where trade federations have not developed their own, and guidelines for those that have to ensure their systems are in line with the ETTF's.

"And our harmonised system will be available across the EU, not only the 10 ETTF member states," he said.

In November, he added, the ETTF would also publish a report on which timber legality verification schemes are EUTR compliant.

Stephen Mitchell of the Australian Timber Development Association said that his country's ILP bill should be passed this year, with full implementation phased in over the next two. He acknowledged that there are still uncertainties, notably about acceptable legal assurance and due diligence risk assessment.

"But we will be developing tools and guidance for importers and domestic processors," he said.

Brent McClendon of the US-based International Wood Products Association (IWPA) said that the prosecution of Gibson Guitars under the Lacey Act highlighted the impact breaching illegal timber laws could have, costing the company US$600,000 to settle. He urged all US companies to study the detail of the case and its potential implications for them, but also said aspects of it reinforced the view of the IWPA and others that Lacey needed reform.

"We're thrilled with what it can do, but we want to help it to do it better," he said.

Among concerns, he added, was that Lacey meant importers complying with "an unknowable set of foreign [timber] laws" and had no "innocent owner protection".

"Legality under Lacey is both simple and complex, and it's turned out to be more cumbersome than industry or government anticipated," he said.

"We want to do the right thing, but we can be overwhelmed by what we need to do to satisfy different importer countries' legislation," said Mohindra Chand of Guyana-based Barama Co. "We need advice and funding."

His message was backed by Sheam Satkuru-Granzella, director MTC London. "Buyers, like the EU, are in a position to help suppliers meet new legislative demands," she said. "We're all on the same side on illegal logging, so we need to hold hands to eradicate it."

Mr Shriver agreed with the need for co-operation. Given that and time, he said, anti-illegality measures would become "normal business practice" and ultimately benefit timber in competition with other materials. 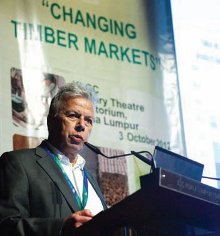 Sheam Satkuru-Granzella: on the same side