Wood is not the issue

The Grenfell Tower tragedy has highlighted a catalogue of errors, none of which can be attributed to wood, says John Park

The Great Fire of London started on Sunday, September 2, 1666 and burned until the following Wednesday. It happened at a time when the city was exceptionally dry, having been through 10 months of drought. It happened at a time when not only had wood been the traditional method for house construction for centuries previously but also when straw was in common use for roof covering. But the most significant factor in the rapid spread of the fire was the proximity to each other of the buildings, something which you can experience today in The Shambles in York.

The fire, not surprisingly, resulted in a change in the regulation of building construction which, amongst other things, set minimum distances between buildings and one requirement unique to London clearly evident today and that is the extending of separating walls to above the level of the roof covering. It also resulted in reconstruction using brickwork for walls and noncombustible material for roof covering although, naturally, wood remained in common use for floor and roof construction and it has been performing quite adequately ever since.

The Grenfell Tower tragedy has highlighted a catalogue of errors, none of which can be attributed to wood and yet, from what we hear and read, the use of wood may suffer as a consequence.

On May 22 this year a man died on the A1 in north Yorkshire after fire broke out following a crash between two lorries.

Similar occurrences are not uncommon when cars are involved and yet the government does not undertake studies that may involve the banning of the use of combustible materials in motor cars. But when the fire has such a profound effect on where we should all feel safe and secure, in other words in our own homes, the reaction of government takes on an entirely different complexion.

Government is not necessarily steered by individuals with any experience of their individual portfolios and so they seek the advice of experts. It was those expert opinions that resulted in the refurbishing of Grenfell Tower with external insulation in order to reduce energy consumption for heating of the dwelling spaces in order to reduce carbon dioxide emissions in their drive to mitigate climate change.

But, not only do the IPCC extol the carbon sequestration property of wood they also consider ‘substitution’ as a means of further reducing carbon dioxide emissions; that is the substitution with wood of construction materials with a higher carbon footprint.

Wood is a complex and paradoxical material with properties in relation to fire which make it suitable for both fire wood and fire doors – the latter providing a degree of resistance to fire and the function known as sacrificial charring enables the performance of wood in fire to be determined with confidence. Without a heat source to sustain combustion, wood does not burn.

To condemn the use of wood because of a catalogue of errors, none of which were attributable to it would be absurd.

Carelessness costs lives, the use of wood doesn’t. 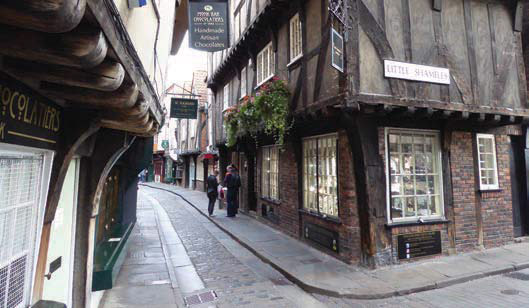 The Shambles in York is similar to 17th century London