How to stand up a sustainability claim for uncertified hardwood was the theme of a recent seminar co-hosted by James Latham, the American Hardwood Export Council (AHEC) and Timber Trade Federation (TTF).

The issue was set in the context that growing numbers of timber businesses and their customers have signed up to the WWF’s forest campaign. This commits signatories to achieve 100% sustainable timber sourcing by 2020 and the most widely accepted proof of this is certification.

Yet, primarily due its fragmented forest ownership, certification has so far made only minimal inroads in the US hardwood sector.

But he said while the FSC had reached 194 million ha of certified forest and PEFC 300 million ha, the rate of certification was slowing, with an increasing market emphasis on verified legality due to such developments as the FLEGT initiative and EU Timber Regulation. This created potential hurdles to achieving 100% sustainable sourcing and called for a rethink by certification organisations and new solutions.

At the same time, said Mr Latham, it was vital these solutions took the US into account as the world’s leading international hardwood supplier.

Rupert Oliver of Forest Industries Intelligence said AHEC had developed a range of alternative routes to proof of sustainability and legality which could act as models for wider application.

The way forward on measuring sustainability, he concluded, was to take a range of factors into account, including resource and energy efficiency, carbon impact, land-use and materials interaction, durability and waste generation.

Julia Young, UK manager of the WWF Global Forest Trade Network, insisted that the measure was not just renewability of the forest resource, but also critically forest management’s biodiversity impact.

AHEC’s European director David Venables said AHEC was looking at ‘how to build other criteria and outcomes into the [timber legality and sustainability] picture’. “The bigger challenge is addressing how we engage with and use the resource,” he said. 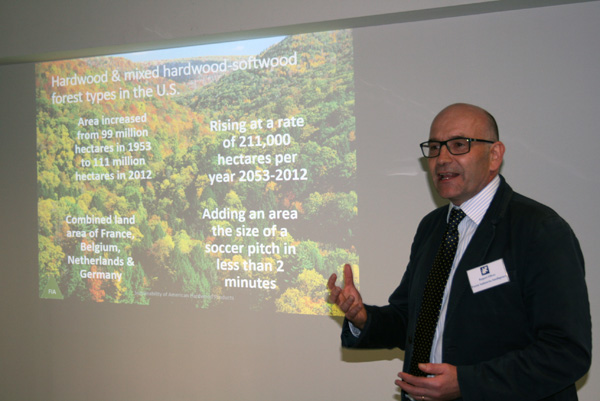