According to the Swedish Coast Guard, following a collision in the Baltic Sea between the UK-registered Scot Carrier and the Denmark-registered Karin Hoej, a preliminary investigation into gross negligence in maritime traffic is being conducted under the direction of prosecutors.

In a statement on its website, Scotline Marine Holdings Ltd, owner and manager of the 2018 built general cargo vessel Scot Carrier confirmed that the vessel was in collision with the hopper barge Karin Hoj, which was built in 1977, at approximately 02.30 GMT on December.

Following reports that one crew member of the Karin Hoj was found deceased and with the second crew member still unaccounted for, the owners and managers offered their heartfelt thoughts to the families of the two seafarers, said the statement.

“The Scot Carrier is now alongside in the Port of Ystad, Sweden and the crew and company will co-operate fully with the investigation into this tragic incident which will be undertaken by the relevant authorities,” said the company.

Following the collision, it is understood that the second officer and master of the Scot Carrier were in contact with the Swedish Coastguard and launched a rescue boat to search for any crew members of the Karin Hoj.

“In line with standard procedures, it is further understood that all crew members of the Scot Carrier were tested for drugs and alcohol with two crew members exceeding the legal limit,” said the Scot Marine Holdings statement, which went on to confirm that it has a strict drug and alcohol policy in place and has a zero-tolerance for any breaches that occur. 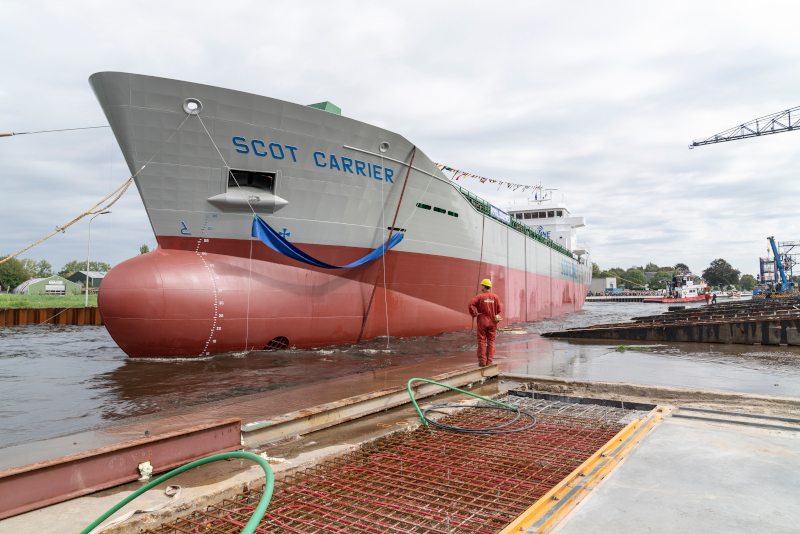 The Scot Carrier on her launch day in 2018