The array of pieces of machined timber on display at JJ Smith’s premises reveal that it is more than a company selling woodworking machinery. Keren Fallwell reports.

JJ Smith could well be described as the agony aunt to the wood processing industry's problems.

The machinery supplier prides itself on not just selling woodworking machinery, but finding better solutions for its customers.

"We describe ourselves as a full service company," said managing director Martin Smith. "We don't just sell machinery, we give advice, install it, commission it and service it." And JJ Smith also provides solutions for customers, some of whom might literally arrive at the company's premises in Kirkby, Liverpool, with a product they want to process more efficiently.

"We'll look at the piece of wood, pass it around and come up with solutions, some of them might be hair-raising, using a technology in a different way. We'll go back to the customer and say 'you can do this and this and it will save you five operations'," said Mr Smith.

"Four of us will discuss it and that's a combined 80 years of working with wood and looking at how you can do things differently. The customer gets the benefit of that."

The company was established as a machinery manufacturer 90 years ago by Martin Smith's grandfather and his three brothers. It produced classical machinery - bandsaws and spindle moulders - and, although it moved out of production in the late 1950s, some of those machines are still in use today.

"Occasionally when we see one in an auction we buy it and do it up with the intention of having a Smith machinery museum but then someone comes along and wants to buy it," said Mr Smith.

When manufacturing ceased, JJ Smith moved into supplying new and used woodworking machinery and it was the original SCM dealer for the UK.

Its speciality is solid wood machinery - standard planers and spindle moulders, automatic cross-cuts, CNC mortisers and timber frame assembly lines - a focus that Mr Smith said is necessary in today's market and to the company's ethos of quality and service.

"The days of being a generalist have gone," said Mr Smith. "To sell at the level we do, you have to know everything there is to know about the product range.

"We're supporting some products where traditionally the machinery importer or dealer might just pass it back to the manufacturer. It makes us a bit unusual but it gives the customer a better service because we give the support in this country rather than try to get support from overseas."

To accommodate this, the five product managers are each responsible for certain products. Mr Smith's area is timber frame machinery.

The company's sales and service philosophy also means it's positioned at the higher end of the market.

"You can always buy something cheaper but there comes a point where it's difficult to sell something very cheaply and give service advice; the sums don't add up," said Mr Smith.

"We like to have machinery that fits in the market at a certain level. For example, we've just become Otto Martin distributors for the north-west and north of England. It's known in the market as top quality and that suits us."

The service team of seven technicians can provide assistance to customers via telephone, email or by direct remote access. But as well as servicing machinery, JJ Smith in essence provides a service to its machinery manufacturers, acting as their eyes and ears as to what customers want and how machines could be developed.

"We tell them what we perceive the market to be, how we think the machine could be made and the price level. They design the machine and we'll be the first to test it," said Mr Smith.

"Because we've worked with our manufacturers for 10-15 years they know us. We tell them if a machine is coming to the end of its shelf life and how it could be developed for a new product."

Mr Smith has been particularly hands-on in the design of the timber frame machinery, which resulted from selling cross-cutters to timber frame manufacturers.

"We could see there was a need to produce timber frame equipment that was suited to our market rather than some other suppliers who were making a standard package," said Mr Smith. "I went to the US and Germany but decided there wasn't anything suitable but that we had enough knowledge of the industry to design something ourselves. We then went to H&M in Holland, which manufactures our saws, and developed a range of timber frame assembly lines."

Big potential
The machinery, designed for the typically open panel UK market, has now been developed for closed panel manufacturing in Holland and Germany, and has also sold well in France and as far afield as New Zealand.

"We think there's a big potential for the equipment," said Mr Smith, adding that again it is the company's service and flexibility that give it the edge.

"We're more prepared to do a special so we can make thicker walls, or wider walls than a standard offering."

A recent example is a floor cassette jig developed for one customer but adapted for the specific needs of others. "We now have an offering that has lots of options depending on what the customer wants," said Mr Smith.

JJ Smith designs and models the whole timber frame assembly line. In one recent job the set-up was such a tight fit it modelled the whole building.

"We did the whole building so when components were turned over or moved we could see if they were going to hit the girders. The average company selling machinery is a long way away from that," said Mr Smith.

As well as selling in the UK, where it is probably the UK market leader for cross-cutting machinery, JJ Smith has a healthy export market, accounting for 15-25% of business, with customers in Australia, New Zealand, Asia, North America and South America. It was the first UK woodworking machinery distributor to sell to China.

In these countries the company follows the same business model as in the UK, using local engineers and distributors to provide technical support.

The different economic cycles of these export markets have provided a buffer for JJ Smith's business in the past but during the recent global recession it has relied on the mix of new and second-hand machinery for cushioning.

"They provide an insurance," said Mr Smith. "In boom times everyone's beavering away and second-hand machines aren't available because fewer people are closing down. Then when times are tough it goes the other way - nobody wants to buy new machinery. The two sides are counter cyclical and have helped the business stand the test of time."

Although the company doesn't crow about its 90-year history, preferring to highlight its products and services, its longevity does provide continuity and the framework for JJ Smith to take a long-term view. Many customers have been with the company for decades.

Being a family business provides stability too. The company employs 25 and the average length of service is 25-30 years.

"When we do the payroll it always comes up with an error for one chap because he joined before he was 16. He's now 68 and largely retired but he works for us now and again," said Mr Smith.

"You need someone who's not involved in the business day-to-day, but who can take a long-term view," said Mr Smith.

"We want to pass the business on in better shape than we took it on. A lot of the business is about people, especially in terms of the knowledge of the product, so you need time to transfer that skill to the next generation."

Mr Smith joined the business 30 years ago and took over as managing director in 1995. In that time he has seen developments in CNC controls and a greater emphasis on the safety aspects of machines, but the principles of woodworking machinery are essentially the same.

"People have tried cutting wood with laser and water but we're back to where we started: we have sawblades cutting wood," he said. "If you look at our old Smith spindle moulder and then at a touch screen spindle moulder they're miles apart but if you strip them back to the basics there's still a spindle with a tool on it. Today it's a lot easier and more precise but the underlying technology hasn't changed."

"Nowadays people want smaller batches. They're looking to save a process, to value engineer so they can make the same quality product more cost-effectively and with fewer processes. That's where the CNC control comes in. It's a trend that's been around for a while but it's a trend that has a way to go. There are still more options for getting information from the design office straight down to the product."

Another development for JJ Smith is the move into machinery for briquetting, shredding and pellet making - a logical step from its other machinery and emphasis on optimising yield and process efficiency.

"It's affected by the subsidy regime, which means it has large peaks and troughs and makes it trickier, but it's a growth sector," said Mr Smith. "We're looking to the long-term horizon and it's an important part of our product range - timber frame, cross-cutting, waste."

And to achieve those longer-term goals, in the medium term Martin Smith plans to consolidate JJ Smith as an independent distributor and solver of customers' woodworking problems, "solving a problem rather than just selling a machine".

"Individual products will come and go," he said. "We want to supply something people are happy with and when they develop their market in a different way we'll follow that development. That ensures the long-term survival of the business." 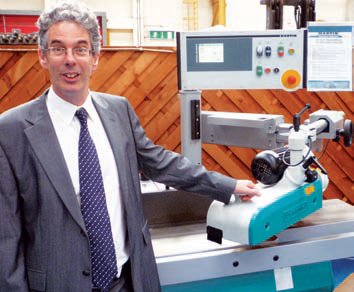 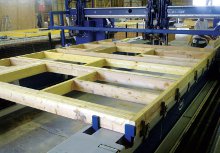 The company exports timber frame assembly lines around the world