The latest figures from the Timber Trade Federation – TTF Timber Statistics Industry Facts & Figures, October 2020 – reveal that “the continued improvement in timber and panel import volumes in the month of July 2020 has placed volumes ‘back on track’ compared to the same month in 2019.

Import volumes in July were just over 1% below the July 2019 level and the TTF notes that this improvement was better than had been forecast.

Of course, the picture for the first seven months of 2020 is different, with solid wood imports down 20% on the same 2019 period, and panel imports 23% lower, but building on the better volumes in June, by July a ‘V’ shaped recovery appeared to be taking place.

In July, Sweden, Finland, Germany and the Republic of Ireland supplied substantially more softwood than in July 2019.

All the leading supplying countries to the UK have shipped less during this period.

Volumes in July were 29% down on those in July 2019 and Malaysia remains the only leading supplying country to have increased volumes to the UK. Volumes from China fell by 4%, from Russia by 10%, from Indonesia by 28% and from Finland by 54%.

South Africa bucked the trend by shipping substantially higher volumes of softwood plywood to the UK – and average prices from South Africa have approached those of Brazilian goods.

Chipboard imports in the January-July comparison period were down by 41.6%, with cumulative volume at 306,000m3 (2019: 524,000m3). Losses in volume of up to 50% have been recorded for imports from France, Portugal and Germany. By type, losses of more than 60% were recorded for more expensive grades, but also for waferboard.

The TTF sees the improvement in the July figures as being an indication that the end year ‘post-Covid’ forecast for all the main timber and panels imported by the UK in 2020 to around 8.4 million m3, or around 19% lower than in 2019.

However, it does caution that “a second wave of infections of Covid-19 and the continuing uncertainty surrounding the UK’s withdrawal from the EU could affect this forecast volume”. 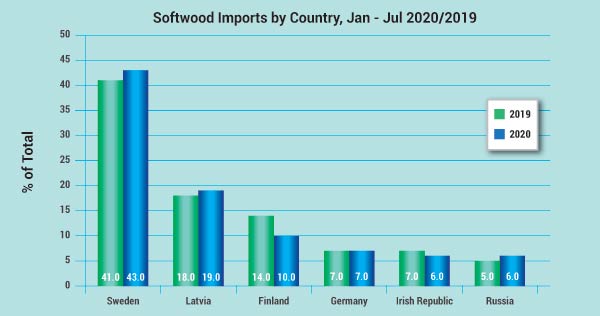