The tropical timber trade has faced significant challenges of late, first the aftermath of the worst recession in a century, now the anti-illegal logging EU Timber Regulation (EUTR), among the most far-reaching, industry-shaping legislation the wood sector has seen.

But, while there's no denying market conditions remain tough, at least parts of the tropical sector feel the worst of the slump is over - or that trade has at least plateaued.

Traders also acknowledge that the EUTR will be a test, probably more for them than the rest of the European industry as the obligation is that companies that first place material in the EU (termed "operators" under the regulation) undertake due diligence illegality risk assessment of suppliers and so much tropical originates from less developed economies.

However, while it is feared some smaller traders and producers may not be up to speed on the new law in time, most operators say they're on track and don't expect its implementation next March to cause huge disruption for their businesses.

As far as the general state of trade is concerned, UK demand for tropical timber remains some way off pre-recession levels.

"Inventories have been reduced across Europe and there's lower demand across all species," said Timbmet commercial manager timber Brian Leathert.

Danzer UK managing director Ken Walsh said trade is also shorter term due to customers reducing stockholding. But he also felt it had stabilised. "In some areas, notably sapele, we've been quite buoyant, although that may also be due to other traders with a peripheral interest in tropical pulling back to core items, and some disappearing, notably UCM," he said. "But in terms of overall business, I'd say we're OK, and maybe OK is the new norm."

Barnswell Timber also reported more even, consistent demand. "It's competitive, but we're finding demand for joinery hardwoods - our main focus being sapele, framire and iroko, with a little wenge and anegre - is reasonable and holding steady," said director Andy Craig.

Evidence that the market is on more of an even keel also comes from external suppliers.

"Trade in some parts of Europe remains slow," said Genevieve Standaert of Belgian international trader Vandecasteele. "But, while the UK is not great, it's not bad and we feel that, as it was among the first into recession, it will be among the first out."

Market balance
Although some species have bucked the trend - meranti, particularly, has been "very pricey", according to one trader - tropical prices have generally stayed in balance with lower demand. There is a view, however, that there may now be more firming, particularly in African species, and notably sapele.

Given the volumes of timber coming via the Continent, one factor this is attributed to is the recent recovery of the euro against the pound.

"Europe isn't the only market," he said. "We're a producer selling lumber worldwide and see growing interest in tropical timber in emerging markets, including other tropical countries in South-east Asia."

A further ingredient expected to increasingly impact on pricing is supply limitations, as even mills confident that the market is improving will take time to restore cutbacks made in the recession.

Another positive factor, however, is growing market acceptance of secondary and lesser-known tropical species.

"Alternatives are picking up sales, especially when backed by proof of sustainability and legality, which now counts for more in customer buying decisions," said an importer.

The benefit of this for tropical traders is that it not just broadens their portfolio, it acts as a buffer against potential shortages of more popular species. Importers are also introducing new lines as a means of increasing their EUTR-compliant basket, hence the number of FSC-certified arrivals.

"FSC isn't a green light through the EUTR, but underlines your commitment to doing the right thing," said a trader. "You also assume that FSC-certified suppliers won't struggle with proof of legality."

Recent FSC-certified additions at Danzer include ekki and tali and internationally it is selling more laminated tropical hardwood, although it says UK buyers remain resistant to the glue lines. Rougier is promoting osanga for decking and other garden/outdoor products, and among new FSC lines from Vandecasteele, whose FSC jatoba has been used in London's Shard skyscraper, are movingui, fixed dimension iroko and decking alternative guariuba.

Meanwhile, although the Belgian company itself has its compliance procedures in place, Ms Standaert remains among the sceptics that the whole tropical sector will be ready for the EUTR.

"My concern is that smaller suppliers will seriously struggle with the bureaucracy," she said. "We've introduced new software and allocated two people to EUTR administration, but how will those companies with a few people cope? And it doesn't help that we're still waiting for so much final detail on the regulation."

Barnswell provides evidence that the EUTR may also persuade smaller traders to readdress their business model. "We're a relatively new business and, while we will be an operator for American hardwood, where we see illegality risk assessment being more straightforward, the EUTR has helped persuade us to postpone plans to buy tropical direct," said Mr Craig "For the time eing, we'll continue to deal with UK and European agents and landed stock."

But, while they see it as an added challenge, the bigger operators so seem largely unfazed by the effect of the EUTR on their operations. Many use the Timber Trade Federation's Responsible Purchasing Policy (RPP) due diligence system, and some back this with their own risk assessments. Timbmet, said Mr Leathert, had been "vetting suppliers' environmental credentials for years" and Lathams, said Ms Link, had a group-wide policy of accepting a minimum of third-party legally verified material.

Some customers are reported to be less aware of their EUTR obligations to maintain sufficient records of what they buy from operators and where they sell it, but that is also seen as soluble. "Smaller customers are not as well informed, while larger ones are more aware of the EUTR, without necessarily understanding its requirements," said Mr Leathert. "But we are communicating with them."

There is also an acceptance that some suppliers will sell elsewhere rather than take on the administrative workload imposed by the EUTR, but a major migration is not anticipated.

"Suppliers for whom the EU is less important, may disappear," said Mr Leathert. "But those with heavy exposure will comply."

Timber from Ivory Coast, notably framire, is among the material thought most likely to be dropped by EU traders due to the country's lack of progress on legality verification. But some believe this will be temporary, with Ms Link pointing out that talks have started on the country securing an EU FLEGT Voluntary Partnership Agreement (VPA), which, in exchange for commitment to improve forestry management and legality assurance, provides a passport through the EUTR.

Move to modified wood
It is thought that the regulation may also trigger some switching to modified wood, but significant substitution by temperate hardwoods is not expected. "Few tropical timbers have a direct temperate equivalent in performance, dimension and price," said Mr Walsh.

Although none is likely to be supplied before the EUTR comes in, tropical timber's prospects in the EU are also expected to be boosted by growing volumes of FLEGT VPA-licensed material in coming years. Some also believe the regulation could ultimately improve the tropical trade's market image by underlining its environmental commitment.

Further evidence of longer-term confidence in tropical's EU future comes from Rougier and Danzer. The former has achieved at least TLTV legality verification of its entire 2.2 million ha of African forest concessions, while Danzer is building a multi-million euro new mill in the Republic of Congo, with the UK and the rest of Europe among its target markets. 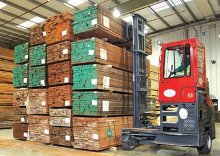 Sapele prices may be firming Photo:TIMBMET 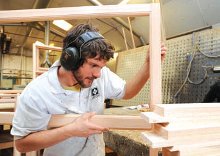 Market acceptance is growing for ‘alternative’ species, like Red Grandis