Timber On the Campaign Trail

This month sees the launch of an industrywide campaign to encourage greater use of wood, Wood CO2ts less. The campaign, developed by Swedish Wood in co-operation with Wood for Good and Confederation of Timber Industries (CTI) members, has been some six months in the planning, long before Covid-19 was heard of. But the theme, which focuses on wood’s unique ability to reduce CO2 emissions, provides a timely argument now that we are looking for a new green economy to help lift us out of the post Covid-19 slump.

The immediate impetus for the campaign came from a presentation at the Institution of Structural Engineers by Professor Gideon Henderson, one of the advisers on the government’s Net Zero 2050 report and currently chief scientific adviser at Defra.

He explained how the government recognised that there would be a number of sectors of the economy, such as aviation, shipping and industry, which would be unable to achieve zero carbon by 2050. Consequently, government would need to rely on carbon capture to reach net zero.

While new carbon capture technologies are under development to shoulder the bulk of this burden, Prof Henderson identified greater use of wood in construction as one simple and largely cost-free way of capturing carbon.

Last year, in its report ‘UK Housing; Fit for the Future?’, the Committee on Climate Change stated “Using wood in construction to displace high-carbon materials such as cement and steel is one of the most effective ways to use limited biomass resources to mitigate climate change. New policies will be needed to support this.”

As we look forward to a post-Covid-19 world, we can decide whether to carry on as usual or build a better future as part of the government’s plans for a wider green economy. Apart from the carbon capture and storage of wood construction (using wood from sustainably-managed forests), there are many other reasons for using wood: its exceptional life cycle assessment profile, its extraordinary strength-to-weight ratio, its suitability for modern methods of construction, its hygroscopic and health promoting qualities, and its availability.

The Wood CO2ts less campaign is a set of tools bound together by a slogan and the core message that using wood can help reduce CO2 in the atmosphere and contribute to slowing climate heating.

The slogan has been designed as a distinctive logo, and is registered as a collective mark by Wood for Good.

The toolbox, available at woodforgood/CO2, also includes information, supporting publications, social media posts, videos and infographics that the industry can use and develop as the basis for its own promotional activities.

This message has been signed up to by all the UK timber associations, and is as relevant to interior design or DIY as it is to RMI or house-building. However, the big opportunity for the timber industry lies in timber frame and structural timber construction, where we can offer the government the capacity to build the hundreds of thousands of promised new homes, while at the same time helping to achieve its goal of net zero CO2 by 2050, and this is where the initial stages of the campaign will focus.

The aim of the campaign is to raise awareness of how using more wood can contribute to reducing CO2 emissions so as to encourage legislators, planners, local authorities, developers, designers and builders to ‘think wood’, particularly at this time of national re-building.

What form will it take?

During 2020, there will be three elements to the campaign:

Who can take part?

It is in all our interests that the campaign is as widely used as possible across the industry, not just during 2020, but beyond. The mark, registered and owned by Wood for Good, is available for use by fee-paying members of Wood for Good. In order to encourage wide adoption of the campaign, use of the mark, subject to conditions, will be granted to members and supporters of trade associations and membership bodies at a nominal cost. If you would like to know more, contact sarah.virgo@woodforgood.com

All guidelines and campaign materials will be available from a members’ password protected area of www.woodforgood.com/CO2

The last few months have been a big challenge to the country and to the industry. Now is the time for the whole UK timber industry to join together to show just how much we have to offer to re-building Britain as part of the new green economy. 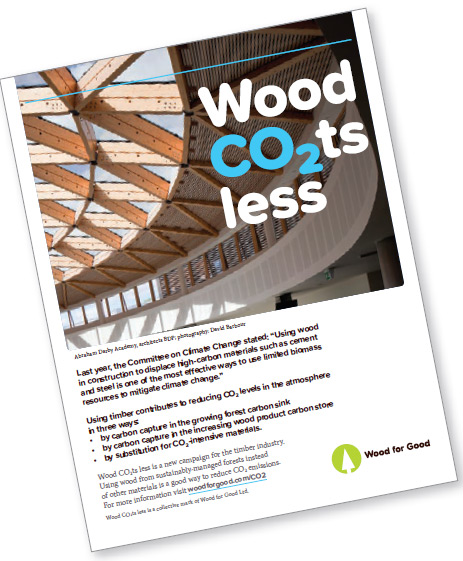 Advertisements will run in the consumer and business press 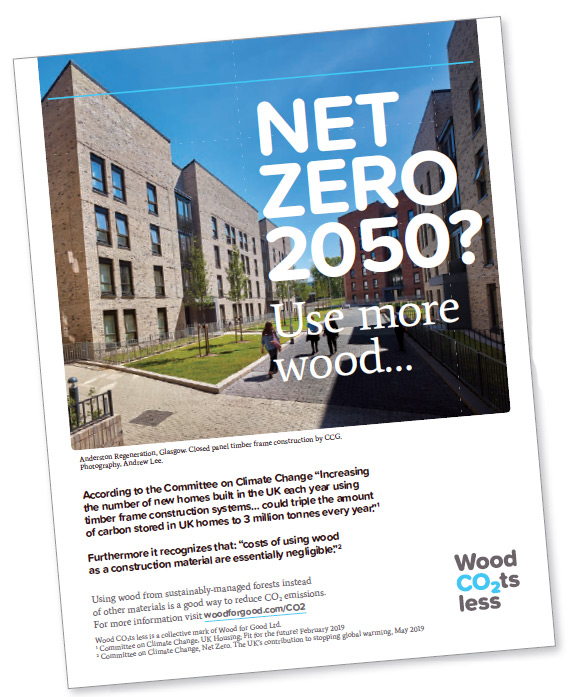 The core message of the Wood CO2ts less campaign