A Woodmart for the world

The inaugural Malaysian Global Woodmart (MGW) in Kuala Lumpur two years ago was an eye-opener.

The biennial international exhibition, organised by the Malaysian Timber Council, not only attracted visitors from overseas, eager to tap into Malaysia's rich wood resource and to see the latest from its timber products sector, it drew exhibitors from abroad too, as far afield as Europe and the US, highlighting that Malaysia and its South-east Asian neighbours are increasingly becoming major wood and wood product importers and consumers, as well as producers and exporters. Products and materials on show ranged from American hardwoods to New Zealand softwood prefabricated construction systems.

And statements from plantation and commodities minister Tan Sri Bernard Lompoc at the last show underlined that Malaysia is on track to become an even more vigorous and diverse player on the international market, looking to both buy and sell around the world.

The country has set itself an annual export target of RM53bn (US$16bn) for 2020, compared to 2011's RM21bn. It is also aiming for 60% of overseas sales to comprise finished products, as against sawn timber and panel products, compared with 40% currently.

The scope and success of the first MGW, and the dynamics of the domestic industry behind it, clearly made an impact on its 108 exhibitors and 2,000 trade visitors. This year's show will be bigger, occupying over 2,000m2 of stand space in the Kuala Lumpur Convention Centre, and have more stands, with 110 exhibitors booked to date, and 10-20% of the final total anticipated to be making their MGW debut.

The exhibition, from October 4-6, is expected to have even more of an international profile as well. Those overseas suppliers which were there in 2010 are strengthening their presence. Show partner organisations, the American Hardwood Export Council and French Timber, are increasing their pavilion space from 36m2 to 126m2 and 54m2 respectively. And among the big names exhibiting under their auspices will be Baillie, Graf Brothers, Northland Corporation, plus the International Wood Products Association from the US, and from France, Ducerf, Eurochêne, Groupe Lefebvre and Saint Loubert.

America's Softwood Export Council and the Programme for the Endorsement of Forest Certification (PEFC) will also make their show debuts.

The accelerating downstream development of the Malaysian industry into more processed, finished and engineered wood products will also be reflected at the show. Among the products on display will be glulam from APP Timber, Lionex, Peka and Norbest, bamboo-based product from Bamboo Bio-Composites, thermally-treated timber from Maxwell Wood and decorative palm plywood from the Malaysian Timber Industry Board's Fibre and Biocomposite Development Centre.

New for 2012 will be an MGW Best Presentation Award, is aimed at boosting stand design creativity and impact. An international panel of judges will assess displays on 'concept, product focus and space utilisation'.

The show will also feature a special presentation targeted at architects: Timber Talk on Wood and Design. Reflecting the growing interest in advanced timber construction systems worldwide, it is intended to provide "insight into timber's inherent qualities as a building material".

Both the keynote speakers are award-winning architects and urban designers. Kevin Hill of Venturer Pte of Singapore will discuss "Creative structural timber works", while Kenneth Yeh of Marra and Yeh Architects of Sydney, Australia, will address "Building with wood - technique and technology".

Following the successful seminar on glulam in construction delivered at the show in 2010, which attracted 190 delegates, the organizers are expecting sizeable audiences at the talks.

The key aim of MGW is to be both a buying and selling platform for the international timber sector and that ambition is clearly striking a chord with the industry worldwide. The organisers acknowledge that the show may still be small, but stress that it is "highly focused on delivering results to its participants". They might have added that it also doesn't look like staying small forever. Visitor numbers this year are forecast to leap 150% to 5,000, drawn from at least as many countries as the 50 represented two years ago.

Exhibitors came from across Asia 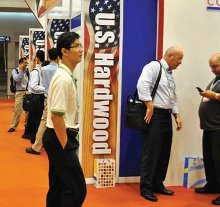