Globally, termites are regarded as the most economically damaging urban pests given their potential to severely damage timber in buildings. Conversely, in natural forest systems, grasslands and other natural ecosystems, especially in the tropics, they are regarded as ‘soil engineers’ that are vital to nutrient cycling, the maintenance of soil structure and ecosystem balance.

Termites are predominantly tropical and sub-tropical in distribution. However, mainly as a result of human activity and warming climates, they are found in increasingly more northern and southern latitudes. Subterranean termites are endemic in southern Europe and in France where a so-called ‘termite law’ exists regarding the construction of buildings to ensure they are protected against termites.

Whilst termites are not endemic in the UK, subterranean termites (of the species Reticulitermes grassei) were initially discovered in a private property in Devon in 1994 and became the subject of an intensive eradication and monitoring programme in 1998 when it was found the termites were distributed across at least two properties.

This infestation remains the only known established infestation of subterranean termites to be recorded in the UK but despite initial success in bringing about the collapse of the infestation, a localised reappearance of termites was recorded in 2009 and 2010 resulting in the eradication and monitoring programme being extended.

The programme being managed by the Ministry of Housing, Communities & Local Government (MHCLG) and conducted by BRE will conclude in October 2021 with the declaration, in all likelihood, that eradication has been successful. This significant milestone is a great achievement and will be confirmed by the members of the steering group for the programme.

However, in the face of climate change we must also remain vigilant and aware that termites might still be being brought into the UK. Part of the closing phase of the programme is to ensure a legacy of improved termite awareness within the construction and surveying communities. This will help provide a more rapid response should termites occur again in the UK.

WHAT TYPE OF TERMITES?

The economically important termite species (that can cause damage timber in buildings) are subterranean termites and drywood termites. There are a number of key distinctions.

Termites are difficult to identify to species, this normally requiring either the soldiers, each species with definitive head shapes and structures, or alates, with distinct wing structures and patterns of venation.

The three key signs of infestation include the presence of damaged timber, signs of live termites and signs of termite workings. Timber may appear sound on the outside, but be hollow as a result of termite activity on the inside. The damage may be checked by ‘sounding’, which involves tapping the timber with a solid object, such as the handle of a screwdriver.

HOW COULD TERMITES GET TO THE UK?

There is a wide variety of ways in which termites could be imported into the UK, these almost certainly involving facilitation by humans.

The significance of importation is very different for subterranean termites compared with drywood termites, the latter being of much lesser economic significance to buildings given that populations of drywood termites would be unable to be sustained outdoors in the UK and can be effectively treated locally indoors.

Subterranean termites are able to be imported on any cellulose-based material that has been imported from an area where subterranean termites have become established, such as susceptible timbers (particularly softwoods) including logs, stored timbers, crates and pallets.

Drywood termites are most likely to be imported from areas of endemic infestation, such as the southern states of the US, the Caribbean, Africa or Asia, in timber items such as potted plants, furniture, musical instruments, boats, chests and ornaments.

Even if subterranean termites were not detected during border inspections, successful establishment requires optimal conditions, which include lack of disturbance, preferably sandy soils, a source of moisture, appropriate temperatures and an adequate supply of cellulose-based food sources to sustain growing colonies.

While the biogeographic range of R flavipes in France, the nearest area of endemic infestation to the UK, continues to move northward and especially while infestations in Paris continue to expand, it is noteworthy that the south-east of England, the part of the UK nearest to France and with the highest frequency of transport between continental Europe and the UK, has predominantly loamy or clay loam soils. Such soils tend not to be as preferred, especially by the European indigenous species.

The risk of successful establishment of subterranean termites is increased where there are heat sources near or in the ground, such as with underfloor heating systems in concrete slab-on-ground structures, especially those on which timber framing is present.

Professionals such as building surveyors, builders, horticultural industry workers, timber merchants as well as the public and gardeners, can help be vigilant over the possible detection of termites. A website has been prepared to help support awareness raising and includes a reporting proforma for submission of possible infestations:
https:// www.bregroup.com/services/research/termitemonitoring- and-eradication-programme/ 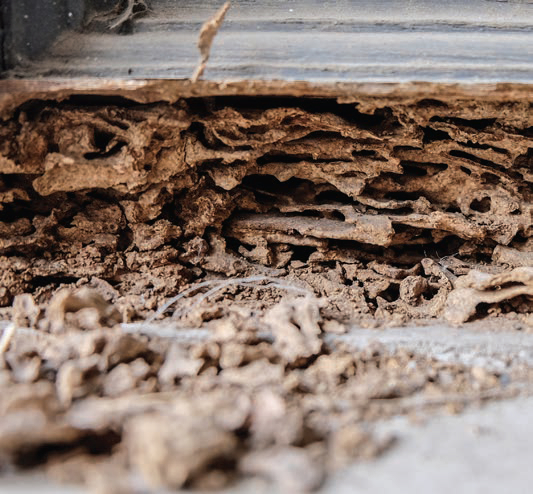 A termite nest in a window jamb 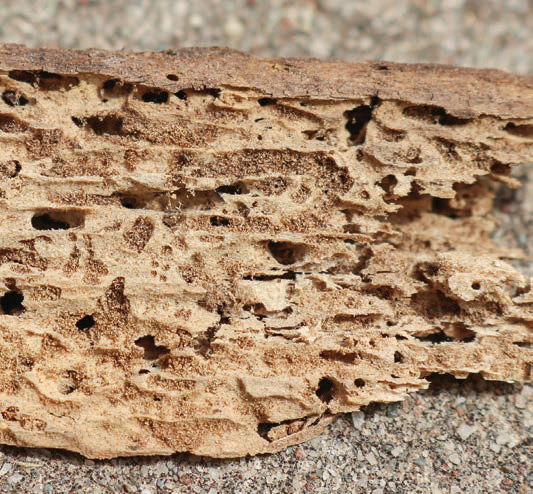 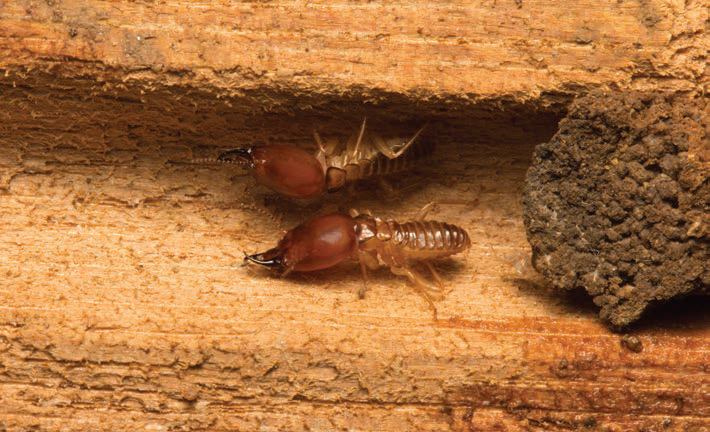