While a very wet winter forced the French timber sector to postpone harvesting, and led some mills to reduce operating hours, from mid-March, forest operators were able to pick up cutting and most plants have since managed to get production back up to near where they'd hoped it would be.

However, recently there have been price rises for all grades of hardwood and softwood log, both from state and private sellers. The overall reason for this has been a decreasing volume of material put on the market due to sellers holding back. But other factors are also involved.

For oak logs, price is driven up by the increasing demand from the barrel industry, which is no longer just focused on highest qualities overall, but also traditional veneer grades and higher quality sawn grade. At the same time demand is increasing for low grades in the burgeoning wood energy sector and among Asian log importers. This has left French sawmillers fighting over restricted quantities with obvious price repercussions. Beech log prices, for instance, have surged up to 25%.

Softwood log prices were also driven up at the start of the year, again partly due to demand from Asia. However, there is a feeling this rise won't be sustained, with buyers finding more competitive supplies in other countries.

As for the fortunes of the French oak sawmillers, having traditionally focused on the domestic market, some are now exporting up to 60%.

Demand on the French market is stable, mainly driven by sales to the flooring and cabinet industry, and also by substitution by manufacturers for tropical timber. The latter is seen particularly in the decking market, with some high profile projects in Paris and in the new road bridge to Mont Saint Michel.

Greater use of heat treatment by the hardwood sector is also helping it gain ground in the former external use preserve of tropical species, and this is also giving them a new design twist which is appealing to specifiers.

But despite the relative health of the home market, oak lumber exports continue to rise. This is thanks to low availability elsewhere and, particularly, US price rises. In fact, exports this year are expected to be up 17% to 250,000m³. Europe is the biggest French oak market, largely thanks to demand in the UK, Germany and Belgium, but China is now our fifth biggest customer, and rising.

Sales of French oak to the UK are mainly driven by oak boules and oak beams. The British barn conversion and restoration market for beams may be slowing, but there are now growing opportunities for beams and railway sleepers in gardening and landscaping.

The market for French beech at home and in the rest of Europe is stable. But high log prices in certain producer areas is forcing some mills to consider switching species.

R&D projects into the use of the species in structural applications may also be put at risk by current price levels, particularly, of course, relative to softwood. Overall, global beech demand has now risen for a decade, partly thanks to its price stability until now. France's biggest markets outside Europe are North Africa and China.

The latter has been growing strongly and now accounts for 40% of our exports. Other Asian consumers have also been buying more, notably Vietnam. Their growth in consumption is also expected to continue, as, despite recent price rises, beech is seen as an alternative to rubberwood, mahogany and red oak, which have increased in cost more sharply.

French softwood producers have also been gaining ground in a difficult market. French imports have fallen by 1 million m³ a year (with sharpest falls in purchases from Germany), while French producers have increased competitiveness by focusing on flexibility and service.

The domestic construction market is tough for suppliers. Despite France needing an additional 500,000 houses due to population growth and demographic change, construction forecasts remain depressed, with the sector hit recently by government regulations to fix rents, which has further deterred developers.

But, with householders staying put, the repair, renovation and improvement market has provided relatively good demand for softwood suppliers. Packaging sector consumption is improving, but is held back by the slow recovery of the wider French economy.

Due to the continuing weakness of the housing market in France, however, more softwood mills are looking to develop their overseas custom. Key target markets are the UK, Italy and Spain and North Africa, and mills are not just focused on sawn lumber sales, but also increasingly glulam, CLT and other engineered and added value products. Having hovered around 8-10% of production, softwood exports hit 20% in 2013.

While their domestic market remains difficult, most French mills are now reporting sales increases thanks to rising consumption in some parts of Europe, in North America, North Africa and Asia, notably China. In fact, some are struggling to cope with demand and their stocks are below average.

And hardwood mills see increasingly buoyant export demand through the rest of the year, helping to restore profit margins following the rise in log prices.

timber used to have to comprise a set percentage of the volume of building materials used in French houses. however, this rule, aimed at improving construction's carbon performance and boosting the timber industry, was scrapped recently due to lobbying from the concrete sector.

despite this, however, the French timber frame and wider timber construction sector continues to grow. the latest figures from timber industry body France Bois Forêt, show the sector in 2012 comprising a total of 2,197 businesses, employing 30,660 and turning over €4bn.

the depressed construction industry saw the overall number of timber frame starts in 2012 fall 9%, but this was against total market contraction of 14%, giving the sector greater market share.

And according to a survey in France's Wood Surfer magazine, timber frame companies said business improved in 2013. 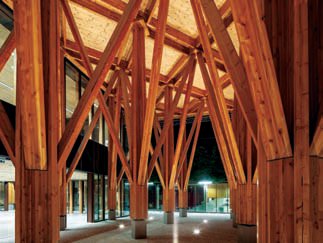 The glulam and timber frame of a Grenoble college. PHOTO: FARGEOT LAMELLÉ COLLÉ 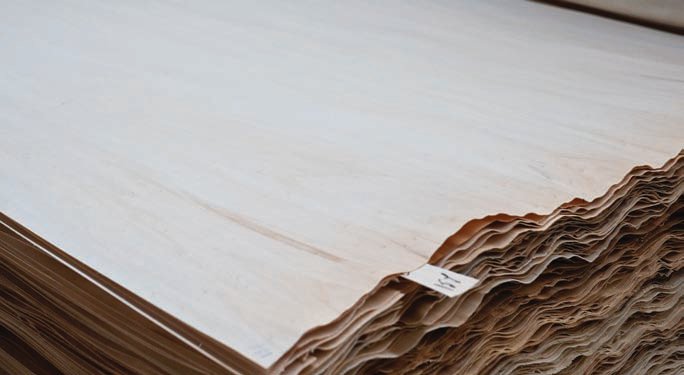 The poplar used by Leroy is renowned for its uniform, fine grain. Photo: Alexandre Nestora