The latest mega takeover in the European sawmilling industry – Mayr-Melnhof Holz (MMH) Holding’s acquisition of Sweden’s Bergkvist Siljan – is expected to be completed during the first quarter of 2022.

Austria-based MMH, which is expected to generate sales of more than 1bn this year, and €252m annual turnover Bergkvist Siljan, announced the deal just before Christmas. The acquisition is subject to approval from competition authorities.

It will see MMH grow its lumber production capacity by approximately 50% to more than 2.7 million m3 of sawn timber per year.

MMH is buying the Swedish sawmiller from investment company Special Situations Venture Partners Funds. The purchase price has not been disclosed.

The new sites Insjön, Mora and Blyberg, right in the middle of Sweden, complement the existing MMH sawmills in Leoben (Austria), Paskov (Czech Republic) and Efimovskij (Russia) and create a starting point for the market entry of the Mayr-Melnhof Holz Group into Scandinavia.

“We are looking forward to a rewarding co-operation and the mutual exchange of experiences,” Richard Stralz, CEO of the Mayr-Melnhof Holz Holding AG.

Bergkvist Siljan was created during the merger between Siljan Group and Bergkvist-Insjön in 2019.

Becoming part of a successful, international, wood industry group was the natural next step for the company, added Mr Bergkvist.

Ulf Bergkvist and Per-Ragnar Bergkvist will continue as part owners in Bergkvist Siljan, and will stay in their current roles as chairman of the board and market director respectively. 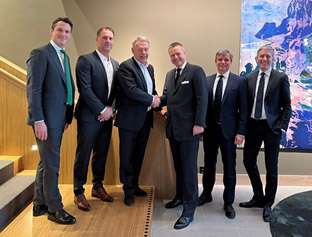 MMH and Bergkvist Siljan executives together