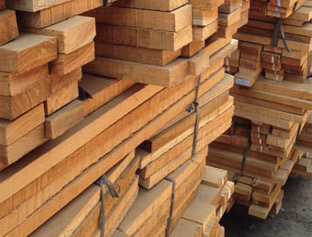 New voices speak out on forestry, environment and FLEGT 25 January, 2016 A technically aware, environmentally committed new generation in supplier countries is increasingly shaping the development of the EU Forest Law Enforcement Governance and Trade Voluntary Partnership Agreement (FLEGT VPA) initiative, and other forestry and timber sector legality and sustainability programmes worldwide. Mike Jeffree asked a range of them in VPA signatory countries worldwide about their views, outlook and aspirations. Here are the responses from Indonesia, Ghana and Honduras > read more

On the waterfront 18 August, 2014 Wijma UK is supplying tropical timber for projects both in and beside the water. Sally Spencer reports

Tropical sawn lumber makes major gains 11 June, 2011 The market is strong for west and central African producers but whether the recent large rises in sawn timber prices can be sustained remains to be seen

Firm prices expected to hold to third quarter 11 June, 2005 Demand and prices for West African logs and timber are steady and the period of stability is forecast to continue well into the year

Year expected to end on a more difficult note 13 November, 2004 Although the next two months may be more difficult than the rest of the year, West African traders remain optimistic for the long term

Market refuses to holiday 07 August, 2004 Prices are firm and, despite the summer slowdown, markets remain quite active

Little change expected during the first quarter 07 February, 2004 Quiet demand is the least of problems for West African producers. They are more preoccupied with low log supply and difficulties in shipping

Belts continue to tighten as margins fail to improve 18 October, 2003 The market for West African exporters is summed up as "dull", with low demand and even lower margins

No price rises expected through the summer 12 July, 2003 West African markets are generally quiet and are expected to remain so for the next few months